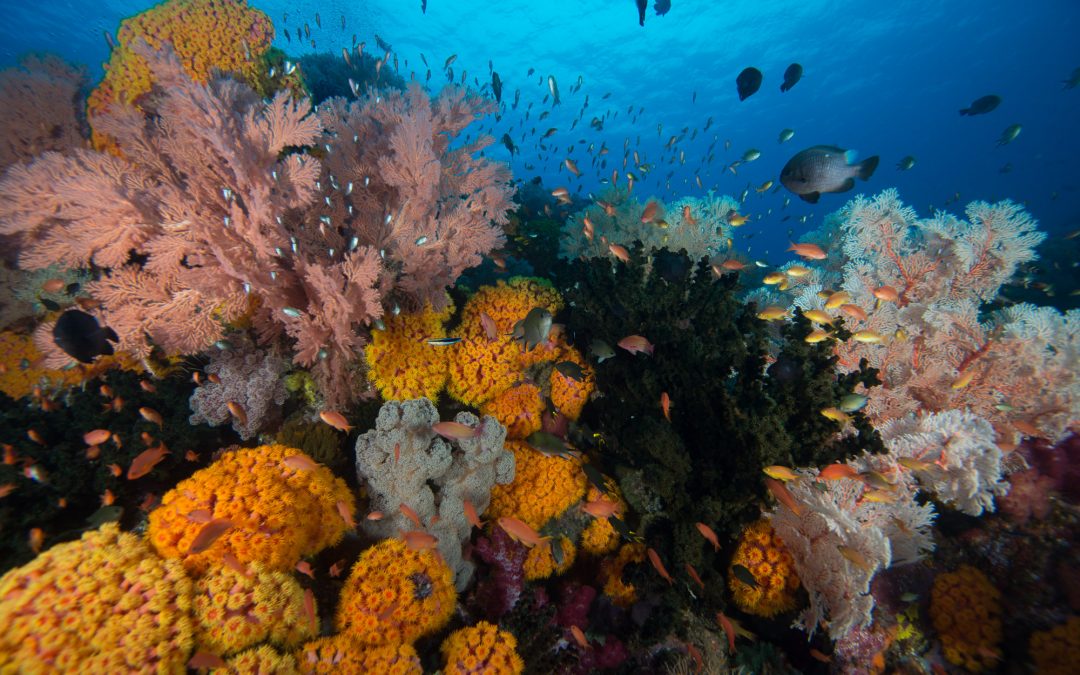 In the darkened salon of Dewi Nusantara on the last evening of the trip, Martin and Kelly were sharing their fantastic images taken over the past eleven days.  Having this opportunity to see a collection of pictures from the trip gave me a real sense of the amazing diving we’d been lucky enough to experience.  Among his pictures, there were many unusual nudibranchs (several of which I’d never seen before), shrimps such as the elusive harlequin and Coleman’s species, pristine reefs and blue-ringed octopuses – to name just a few.

Wendy and I, who together make up ‘Our Beloved Seas’, had tailored this trip to explore northern Raja Ampat.  As with all our trips, we planned to dig a little deeper and get off the beaten path with our voyage.  We visited only the northern two ‘Kings’ of Raja Ampat: Batanta and Waigeo Islands.  Usually, charters also head far south to visit Misool Island too, so this gave us much more time to visit some sites we’d had on our radar in the north for a while.

The trip was off to a bang in northern Batanta.  Our quarry in the small and unassuming bay, which was our first stop, was a very special fish indeed.  The picturesque dragonet (Synchiropus picturatus) is, in my opinion, the more beautiful cousin of the mandarinfish.  Whilst the ostentatious mandarin is most well known for its coital displays that take place at dusk each day, there was none of this lewdness with our picturesques.  These turquoise fish, covered in psychedelic rings, were going about their business on a rubble and coral slope.  Although I haven’t seen one in eight years, I must have seen at least a dozen in the hour we spent scouring the slope.  We then surfaced to another natural spectacle as dozens, well 140 by our count, of Papuan or Blyth’s hornbills (Aceros plicatus) came to roost on the island adjacent to where we’d been diving.  We could hear the characteristic whooshing of these huge birds as they flew overhead in pairs and small groups.

Our next day was spent with equal numbers of special fishes; they were just several orders of magnitude larger than those from the previous day.  Wendy had found a new manta cleaning station and we spent two dives cruising between the coral outcrops that accommodated the cleaner wrasses that drew the mantas to the site.  It must have been manta rush hour at the site, there was an almost incessant stream coming to be cleaned.  At one point I was buzzed by a squadron of five pure black ‘Darth Vadar’ mantas.  Whilst the black form isn’t uncommon, I had never seen so many at one time.

Heading further north, we spent a couple of days in the bountiful Dampier Strait area, diving the world’s most biodiverse coral reef (well, that is according to a fish species count undertaken by Dr Gerry Allen a few years ago).  We saw white tip, black tip, grey and wobbegong sharks, which is sadly quite an extraordinary species count for anywhere in southeast Asia these days.  Turtles and large clouds of fishes complemented the little creatures such as Pontoh’s and Severn’s pygmy seahorses, flamboyant cuttlefish and ghost pipefishes.

Next was Aljui Bay, one of my favourite places to dive in Raja Ampat, if not the world.  The topside scenery is extraordinary and the underwater world is equally unexpected.  I have seen several unique Denise’s pygmy seahorse associations with the gorgonians here.  On this trip we saw Denise living on an Echinogorgi gorgonian in a colour form that I hadn’t seen previously.  The pygmy was bright red and white, much like the form of Denise seen more commonly in the south of Raja Ampat.  The ever-rewarding night dive at Cendana Dock pearl farm didn’t disappoint.  Between us, we had many cephalopods such as white-v octopus, bobtail and bottletail squids, as well as other treasures including toadfish singing and waspfishes.

During the night after leaving Aljui, we passed over the equator into the northern hemisphere on our way up to Wayag.  This beautiful island group is the poster child for the whole of Raja Ampat.  The view from the top of one of the hills across the islands is stunning, as are the islands at sea level.  After three current charged dives, where I saw bigger schools of trevally than I’ve ever seen anywhere before, we went on a little boat trip round the islands.  Out of the azure waters burst steep limestone mountains covered in spartan tropical growth.

Several days’ diving and cruising southwards found us finally sitting back in the waters off Batanta Island, with just two muck dives remaining on a site called Algae Patch.  Although the currents into the channel between Batanta and Salawati were ripping, we had nice calm conditions for our dives.  The list of critters clocked up by the whole group during these two dives was outstanding.  Many amazing nudibranchs were firsts for most of our guests, ghost pipefishes and hoards of unusual shrimps made up the roster.

Although the trip absolutely flew by, I’m pleased to be diving with many of our guests again very soon.  The Philippines trip is just round the corner in September, which many are joining.  Although the next trip with spaces isn’t until March 2017, when we will be sailing from Sorong to Kaimana taking in the rarely explored highlights of the Fakfak coast and Triton Bay.  For more information about our upcoming trips check out my expeditions page, or contact me. For images from this trip, check out my album.