In October 2018, my colleague from the IUCN Seahorse, Pipefish and Seadragon Specialist Group, Dr Louw Claassens, and I visited the remote northeastern corner of South Africa in search of a possible new species. Louw, the director of the Knysna Basin Project, is based in Knysna in the south of South Africa. She had visited the area several months before with another of our colleagues, Dr Dave Harasti in search of a different new species. Sadly, bad weather prevented them from getting in the water, but they were shown a picture of a fish they didn’t recognised by local diver Savannah Nalu Olivier, which is when they contacted me.

Immediately, I recognised the image as a pygmy seahorse, but knew that a pygmy had never been recorded from the Indian Ocean before. It was the equivalent of finding a kangaroo in Norway! I immediately began planning a trip and a few months later, Louw and I were in Sodwana Bay and ready to go hunting. We joined up with Savannah, who had been watching these tiny fish for some time and was vital in the process.

We have since been working with colleagues from around the world to name this new species as the Sodwana Pygmy Seahorse or South African pygmy seahorse – Hippocampus nalu. The name is in recognition of Savannah, who first brought this amazing fish to our attention.

– Along with some colleagues, I published the scientific description (formal naming) of this species in May 2020:

My new book ‘The World Beneath‘ includes a chapter about my pygmy seahorse research and more about the Sodwana pygmy seahorse. MORE HERE 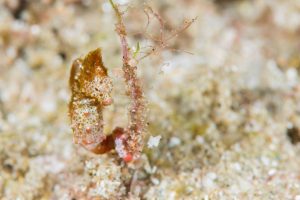 New Pygmy Seahorse Discovered, First of its Kind in Africa

A Strange and Tiny Seahorse Has Been Discovered in South Africa

Newly Discovered Pygmy Seahorse Species Is the Size of a Fingernail