Ghost pipefishes are masters of disguise.  In fact they may have some of the best disguises in the sea, which range from uncanny mimicry of leaves, crinoids, algae to sponges and seagrass.  It is quite a challenge to find some of these little gems but well worth the hours scrutinising every little thing that moves on the reef.  The range of colours and body shapes can make even the seasoned critter hunter surprised by this amazing group.

How do ghost pipefishes reproduce?

Their reproduction is unlike the true pipefish, in which the male broods the young, it is the female ghost pipefish that broods the eggs within large fused pelvic fins located under the body.  Most species have a relatively long period spent floating around in the ocean as plankton, reaching almost adult length before they finally settle onto the reef.  This means that they have a wide geographic range since they can travel long distances after they are born.  They are generally found living in pairs with the smaller, skinnier of the two male and the large individual, with bigger fins, the female.  They range in size from 10-15 cm.

What are the different ghost pipefish species and how do you identify them? 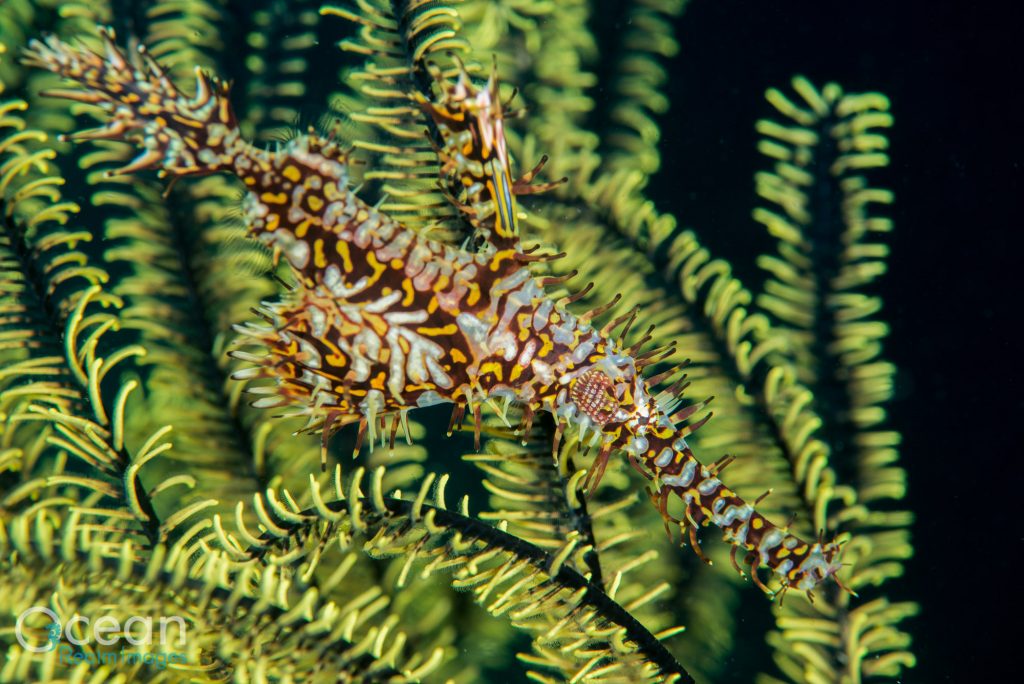 This is probably the most well know species, which is also known as the Harlequin ghost pipefish.  It is often found in pairs living along side crinoids (feather stars) and occurs in a startling rainbow of colour forms.  As well as feather stars I have seen this species mimicking soft corals, hydroids, whip corals and gorgonian corals.  The small protrusions that cover the animal’s body help break up its outline in these micro-habitats.  Like the other species the ornate ghost pipefish is a predator of small mysid shrimp.  Juveniles are almost transparent but are nearly adult length when they settle from their planktonic stage. 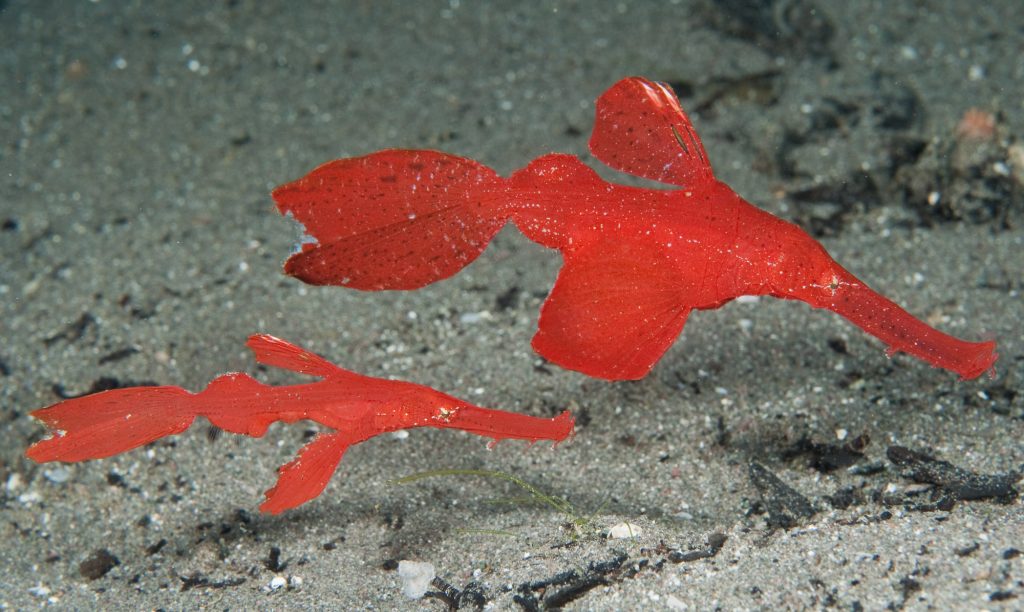 Another of the more common species.  It can easily be identified by a uniform colouration of beige, brown, black, green or very rarely bright red.  It has no filaments or hairs and no distinctive markings over the body.  It mimics seagrasses with uncanny ability and also sways with surge or current in the same way as an inanimate leaf.  Having seen a few of these you will suddenly have a subconscious search image in your brain and begin seeing them at every turn.  It does become a little worrying when you see them on land too! 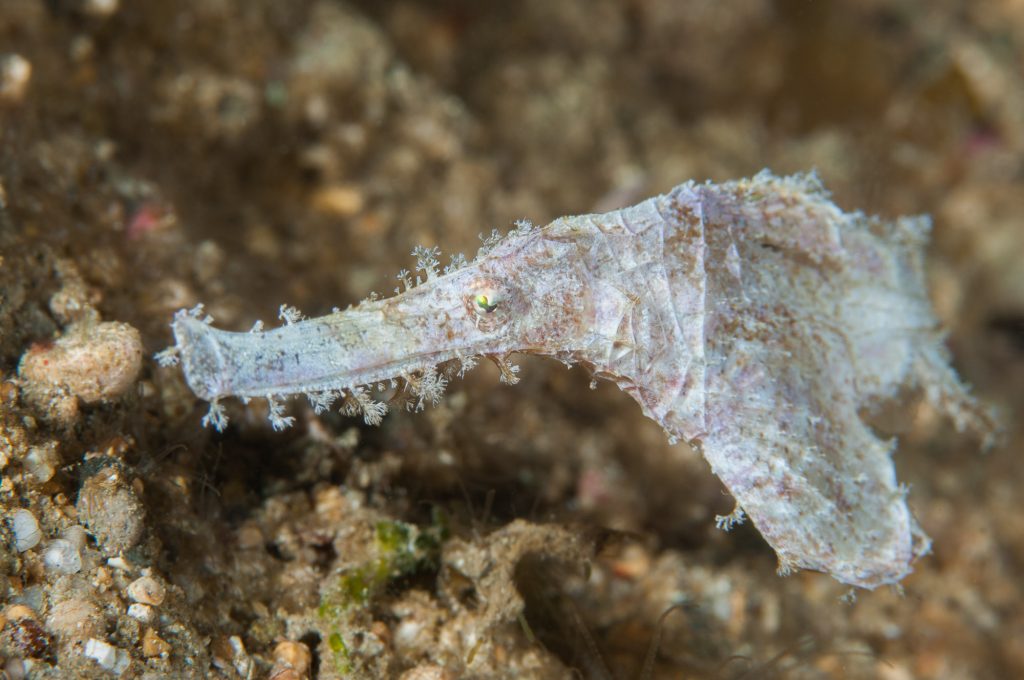 Identifying this species isn’t rocket science.  The presence of weedy appendages underneath the snout is key.  The amount of ‘hair’ on the body can be highly variable ranging from virtually smooth to a very shaggy in appearance.  Colouration is generally greenish or brown but if you’re lucky there are also red forms, this depends upon the colour of local algae, which it mimics.  The body is elongate and similar in shape to the robust species with the exception of appendages under the snout. 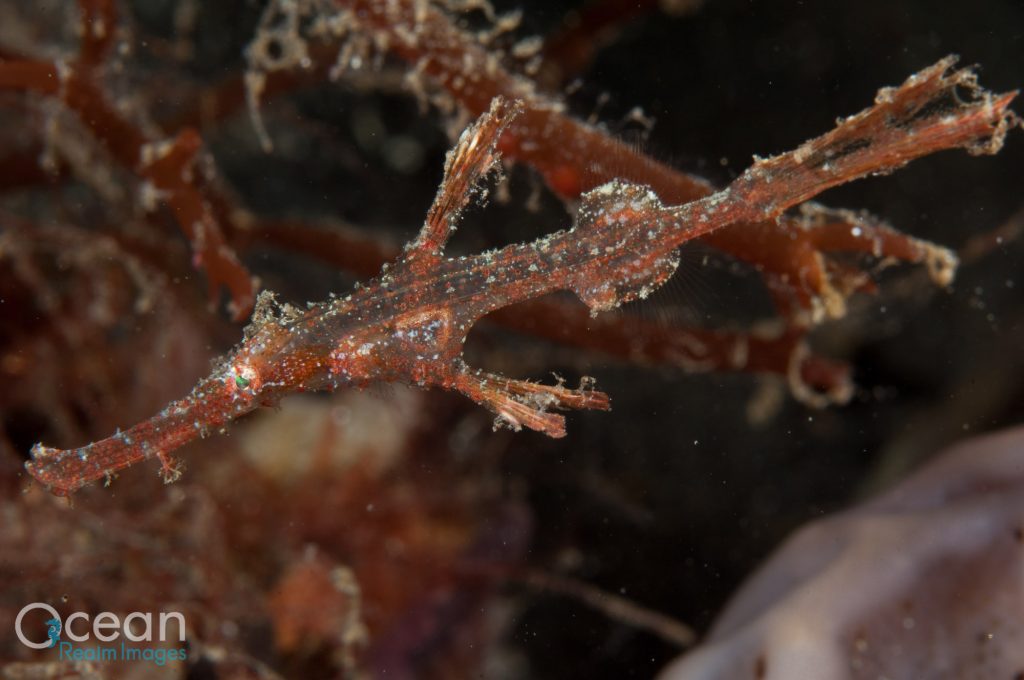 This is a fairly uncommon species but can be quite easily identified by a thin white stripe down the middle of the body.  Whilst uncommon, it has a wide geographic range across the Indian and Pacfic Oceans.  It is quite slender in comparison to the other ghost pipefishes and commonly redish or brown in colouration, although sometimes it can appear almost transparent.  There is usually a small weedy appendage under the middle of the snout but some individuals may have more than others. 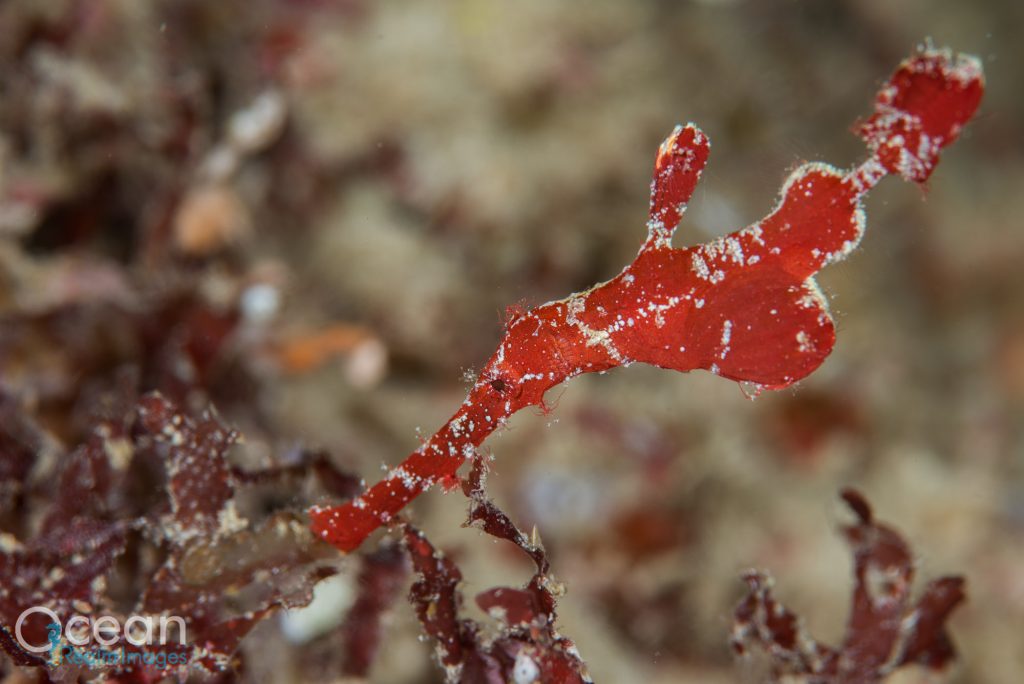 In some localities around Southeast Asia this species can be quite common, and in others totally absent.  As the name suggests it is found living with Halimeda, which is a hard, green calcareous alga that often forms large patches on the reef.  The ghost pipefish has rounded fins that resemble the individual growth segments of the Halimeda.  The alga is green or white in colouration often with red filaments and as a result the ghost pipefish in a particular patch of the alga resemble these colours exactly. 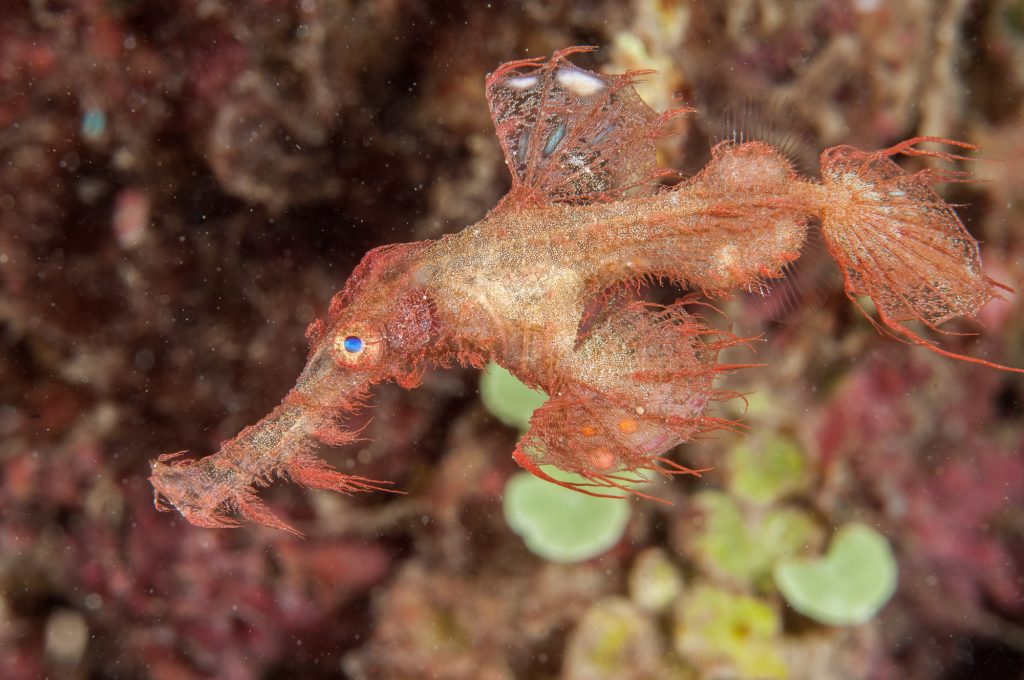 This species has not officially been scientifically described and named but is fairly well known from the Coral Sea region between Australia, Papua New Guinea and the Solomon Islands.  It is covered in long red filaments and has a more compact body than the hairy forms of the rough snout ghost pipefish, with which it could possibly be confused.  It is found living near filamentous algae that has a similar form and colour as the fish. 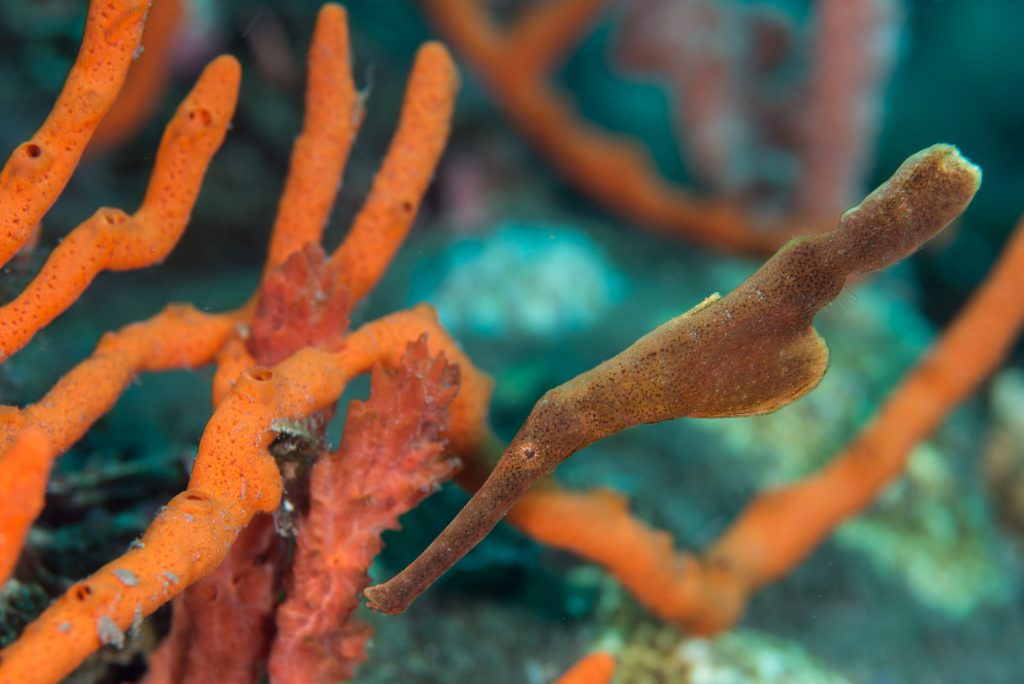 This species is one of the more colourful ghost pipefishes existing in white, baby pink and brilliant red.  These colours seem gaudy out of context but in their habitat of a vibrant reef it blends in magnificently.  The surface texture mimics that of the sponges with which it is usually found and the shape is also reminiscent of certain small sponges.

Where do ghost pipefish live?

In many parts of their range ghost pipefish are extremely seasonal and only present for a few months of the year, usually when the water is warmest.  This varies from location to location but local guides will usually know when this is.  Ghost pipefishes generally do not like areas of strong current, preferring sheltered spots such as bays or ‘muck’ sites.  Search for them around small outcrops of coral, algae or sponges on sandy slopes.

How will I take the best shots of ghost pipefishes?

Given that ghost pipefishes are fairly confident in their camouflage they are usually secure in hanging around whilst photographers get the shots they want.  Having said that it is the responsibility of the photographer to treat them with respect and limit disturbance to the animal.  As with all underwater creatures they will be much easier to photograph if they are not manipulated or poked to get them in a better position.  This puts the animal in a defensive mode and is much more likely to shy away from the diver making photographs much more difficult.  With care and patience ghost pipefish are excellent subjects that make lovely photographs.