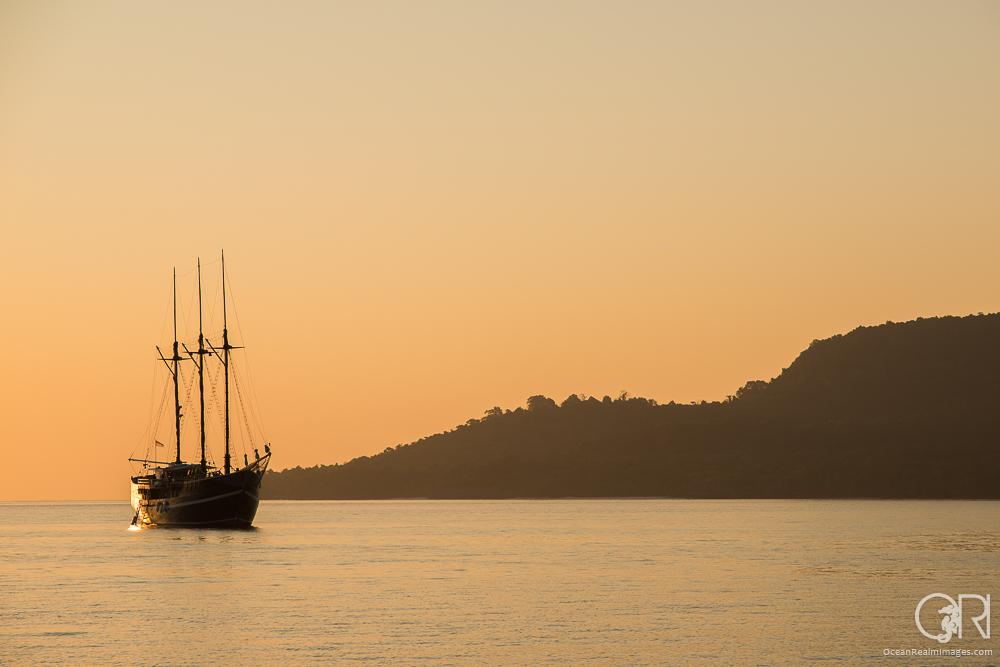 We have just returned from the inaugural ‘Our Beloved Seas’ trip aboard the beautiful, Dewi Nusantara.  We were pleased to be joined by so many old friends on this first trip, as well as welcoming several new faces too.  Our eleven night itinerary started in Maumere on the Indonesian island of Flores and took us to dive sites on the islands of Kawula, Pantar and Alor, as well as further east to the rarely visited island of Wetar.

Wendy Brown and myself make up ‘Our Beloved Seas’ and together lead scuba diving expeditions for divers interested in learning more about marine life and exploring some of the best dives the oceans have to offer.  Wendy’s exhaustive knowledge of Indonesia’s dive sites gets us to the best places to explore the region’s diversity and I give marine life talks so people can learn and appreciate fully the amazing creatures and ecosystems we encounter.  We are both passionate about conserving the world’s seas and for each of our trips we donate a percentage of the proceeds to a different conservation organisation, which we feel are doing great work.

For this trip we chose to support the Save our Seas Foundation, who do fantastic work through the funding of conservation, education and research projects around the world.  In the Coral Triangle region they fund projects that work to reduce destructive fishing techniques, as well as the protection of marine megafauna such as sharks, turtles and mantas.  More specifically, around Indonesia they have a major project conserving and researching the magnificent manta ray and the fisheries targeting them in Bali, Komodo and Raja Ampat.  Definitely a worthy cause in our eyes! If you’re interested learning more about them, you can visit www.SaveOurSeas.com and you can also support them through their ‘donate‘ page.

MARINE LIFE LECTURES AND THE SURPRISES OF ALOR

During the trip, I presented marine life lectures every other day (with a few extra-curricula ones in between).  The talks started with ‘The Marine Life of Alor’, focusing on the special creatures we hoped to see, including the two Rhinopias species the Paddle-flap (R. eschmeyeri) and weedy scorpionfish (R. frondosa) and their identification.  The weedy scorpionfish is commonly misidentified as the lacy species (R. aphanes), so I wanted to help our guests with their correct identification for when we inevitably found some on the trip.  You can read my blog about Rhinopias identification here if you need a reminder!

What I enjoy so much about diving around Alor and the eastern Lesser Sunda Islands, is the real surprises you come across on a day-to-day basis.  Whilst amazing and rare as hen’s teeth, Rhinopias aren’t even considered a surprise in these parts.  You can almost guarantee these rare fish around Alor, indeed five were spotted on this trip alone.

There were several new behaviours and species for me on this trip.  The new behaviour I was most excited about was the parental care exhibited by the spiny chromis (Acanthochromis polyacanthurus) to its fry.  I had never put two and two together when I’d seen little balls of fry around the reef, but now I’ve identified what I’m seeing and these doting parents are everywhere.  There are only three species of damselfishes that care for their young in this manner, which cuts out their pelagic life history stage.  So it’s a treat to see this in action.

There were two exciting new fish for me on this trip too: the harlequin grouper (Cephalopholis polleni), which I spotted on a dive in northern Pantar, and a wobbegong shark in Alor, which was particularly exciting.  I have seen the tasselled wobbegong (Eucrossorhinus dasypogon) in Raja Ampat many times, but the shark we saw in Alor clearly belonged to the closely related genus Orectolobus.  Alor is well outside the known geographic range of any described wobbegong shark.  The thinline wobegong (Orectolobus leptolineatus) is known as far east as Lombok and the northern wobbegong’s (Orectolobus wardi) only Indonesian record is from the Aru Islands to the west.  Fortuitously, several of my friends are experts on wobbegong sharks, so I hope to be able to get some more information on the identification of this unusual carpet shark over the coming weeks, so stay tuned.

During this trip we returned to Wetar Island, which is a remote and rarely visited island in the very eastern Lesser Sundas.  I actually dived the very same site in April when I was aboard Dewi with Paul Humann, Ned and Anna DeLoach.  During the dive, I passed a rock where I remember having seen my first ever juvenile Cross’s damsel (Neoglyphidodon crossi), a species which is known only from the eastern half of Indonesia.  I though ‘why not’ and had a look to see if it was still there.  Sure enough there it was, slightly larger and having lost some of the bright orange and blue that had attracted my attention three month before.  I was really chuffed to have seen it again and to see how it had developed.

We also shared several special experiences above water as well as below.  In Wetar we visited a couple of small villages and I met my first ever crocodile whisperer (I don’t imagine many people can make such a claim!).  The villagers were so friendly and welcoming to us and happily showed us around their schools and churches, although sadly no crocs were sighted.  Returning to Dewi after one village adventure, we all convened on the bow to watch an absolutely stunning sunset.  Suddenly someone spotted something breaking the surface a hundred metres away, which turned out to be a mother humpback whale with her calf!  It was truly a moment I will never forget.  The pair repeatedly and serenely broke the surface to breathe, the sound of which was clearly carried to us in the calm air.  The surface water was on fire with the reflection of the sunset, making an outstanding and memorable moment.

Sadly, the final day of the trip was quickly upon, which meant it was time for our fun photo competition.  It’s just a bit of fun so we can share images taken from the trip.  However, the popular vote decided the grand prize winner.  The crowd’s cheers helped us whittle the forty images down to three, with David taking the grand prize with his displaying flasher wrasse.  Dena and Katsuko were close runners up with their jawfish with eggs and seahare shots respectively.

The evening was perfectly rounded off with an amazing video presentation of muck dive macro critters by Mary Jane.  We’d also been treated to stunning megafauna videos from George, of whale sharks in Cenderawasih Bay and bull sharks in Fiji earlier in the week, so we’d seen plenty of National Geographic quality footage from just two of our guests during the week!  Hopefully they’ll have a compilation to share from this trip sometime!

To see some of my images from the trip, please follow this link to my Alor and Wetar | August 2014 album.

If you would like to learn more about any of our upcoming trips, feel free to check out my website’s expeditions page | here

Both Wendy and I are also on twitter | rich_underwater | OurBelovedSeas