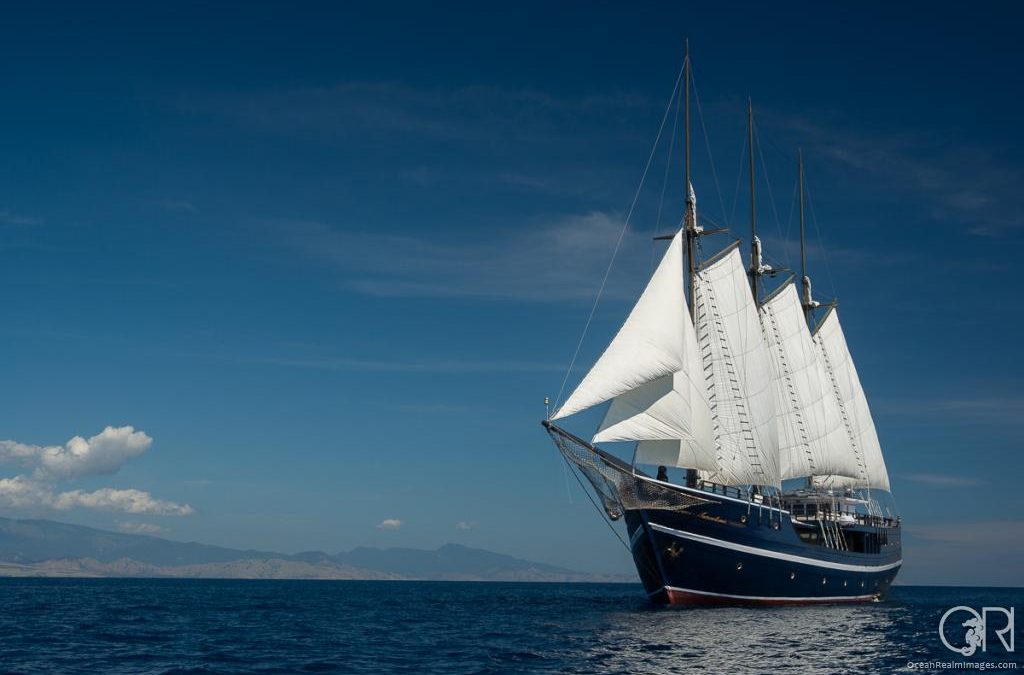 A few days after another fantastic trip as resident naturalist on the stunning Dewi Nusantara, I am ruminating over our adventures from a somewhat contrasting setting in England’s rolling Cotswold Hills.  Despite the Cotswold’s inherent splendour, being designated nationally as an Area of Outstanding Natural Beauty, the untouched wilderness we explored aboard Dewi around Alor is incomparable.  England has been manipulated and moulded by man for thousands of years, but the forested islands and untouched reefs of Alor remain largely as they always have been.  Indeed, during our trip we even witnessed active volcanoes creating fresh new lands for nature to claim afresh.

This trip, the second hosted by well-known authors of the fish ID and behaviour books Ned and Anna DeLoach and Paul Humann, began and ended in Maumere on the island of Flores.  From here we explored the islands of Alor, Pantar and Lembata.  This area hasn’t been explored to such an extent as others in Indonesia, but it experiences some unique oceanographic conditions that make it very different from all other parts of the world.

On our previous trip which took us across the Banda Sea, we had chance to stop briefly in Alor and I found a single male Humann’s fairy wrasse, Cirrhilabrus humanni.  Sadly, it was at the end of the dive and only Anna got chance to see and film it (have a look at the first ever video taken of this species when she first discovered it in 2010, click this link).  I hoped to find more on this trip and share this rare and beautiful fish with more people.  Luckily, I have managed to develop the eye for Humanni, and my brain now knows how to pick them out from a crowd of very similarly coloured Javan fairy wrasses.  Over the course of the trip, we found several males and their hareems at one site in Alor, only a couple of miles from the place Anna first discovered the species.

The Curious Case of the Monotone Bicolour

After a couple of days in the Pantar Strait between Alor and Pantar Islands we headed south to one of my favourite spots, Beangabang Bay.  This bay never disappoints and is different every time, concealing many treasures for the observant to find (luckily, we had a gaggle of eagle-eyed guides on hand to fulfil this roll).  There is an outstanding muck dive on the black sand in front of the village, but on this visit my most memorable dive was on the nearby reefs.  On one particularly large bommie, Yann called us over to show us a very striking fish.

At first glance it closely resembled a goldfish, which would obviously have been rather out of place on a saltwater reef, but after looking more closely at my pictures I identified the red and white fish as a bicolour anthias (Pseudanthias bicolor).  The fish appears to carry a genetic colour mutation affecting pink or lavender pigments, somewhat like an albino but only influencing certain pigments.  In this case, the belly of the fish was pure white, rather than pink as expected.  Although quite eye catching, the kaleidoscope of colour that is a coral reef, must have been adequate to conceal the fish.  Perhaps it will even reach maturity and pass
on its genes to future generations.

Rhino what, Rhino Who?

Alor is renowned for being one of the best places in the world to see the wonderful Rhinopias scorpionfish.  The ‘Holy Grail of the Underwater Photographer’ is rare at best and often found very deep, but in Alor they can be common and shallow.  On the first trip we saw three individuals during our brief visit to the region, but with more time on this trip we saw a total of five: three red and two yellow weedy.

There is always considerable confusion regarding the identification of Rhinopias species.  People commonly want to call particularly filamentous examples of the weedy species (Rhinopias frondosa) the lacy species (Rhinopias aphanes).  Their specific identification, however, is largely a matter of geography.  The lacy is found only in (and endemic to) the Coral Sea region including the Great Barrier Reef, Papua New Guinea and the Solomon Islands.  The weedy is much wider ranging and found all the way from east Africa to the Pacific islands.  As such, you can come across weedies in PNG, but not lacies in Indonesia.  Apart from geography you can also look at the pattern.  Roughly speaking, weedies always have a pattern containing circles, whereas lacies have lines.  I am so very passionate about the identification of Rhinopias that I even wrote a blog about it, so you can read more about Rhinopias ID by clicking this link.

Again this trip we were lucky enough to witness the volcano of Kumba erupting.  It had always been an ambition of mine to see an active volcano and with Kumba exploding every ten to fifteen minutes I certainly got my chance.  Dewi floated a safe distance from the volcano as smoke billowed from the caldera and occasional molten rocks and lava were flung aloft and rolled down the scree slope all the way to the ocean.  The sound from both the eruptions and the vaporised water as rocks hit the cold sea could easily be heard, and felt, from our safe haven aboard Dewi.

Thanks to the eagle eyes of the dive team, Andre, Ben, Risko and Yann as well as Cruise Director, Wendy, we saw many underwater treasures on the trip. I’m always sad to leave Dewi Nusantara and her fantastic crew, but this time I know I’ll be returning in only a few months.

I will be back on Dewi for two charters in August/September this year, that I am co-hosting with Wendy under the banner ‘Our Beloved Sea’.  I have known Wendy for almost ten years and it is our shared love of Indonesia’s amazing marine life and a sense of exploration that made us decide to lead expeditions together.  Our trips will have a similar, but slightly different, itinerary to this one.  Both will include the very best of Alor, Pantar and Lembata as well as the volcano of Kumba, but the first will also include the rarely visited island of Wetar and the second will include the Wakatobi chain.  On the first trip we have a deluxe cabin available and, due to a recent cancellation, the Master Cabin has also recently become available. This rarely happens and is likely to be snapped up quickly so let us know as quickly as possible if you’d like join us in the ultimate lap of luxury!

You can read much more about these trips, and download a flyer, on my expeditions page click this link.

Images | I have created a gallery of images from the trip, which you can view by following this link.

Also, click through to read my report from the first trip as well as images from it.

To keep up to date with my Expeditions, Images and Publications you can follow me on facebook, twitter or sign up for blog updates by entering your email address in the box just to the right.