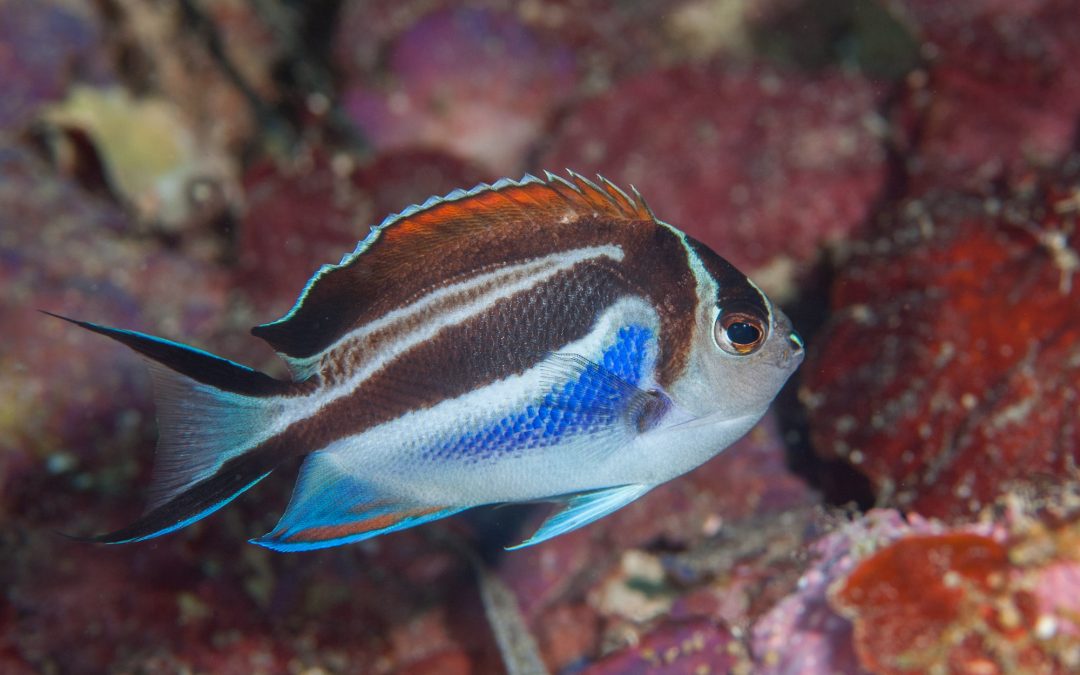 The small harbour of Manokwari, surrounded by verdant mountains and filled with an eclectic mix of vessels from across Indonesia, was the starting point for our second Cenderawasih Bay voyage.  Following two hectic days cleaning, refuelling and carrying out routine maintenance of the boat a full complement of guests arrived for our second trip aboard Dewi Nusantara (you can see pictures from the trip here).  After the guests arrived we immediately began our journey southwards into the Cenderawasih Bay marine park, Indonesia’s largest.  Over the coming two weeks we sailed from Manokwari in the north west of Cenderawasih, down to almost the southern point.  From there we went back up and dropped our ranger in Manokwari, before the epic crossing to Raja Ampat where we spent four days, ending up in Sorong.

Cenderawasih only caught scientists’ attention in 2006, and these early surveys immediately highlighted the bay’s unique assemblage of endemic fishes.  It was discovered that the bay is actually an excellent example of evolution in action.  Fifteen of the fish species found abundantly on its reefs are found nowhere else on the planet, and a number of others have unusual colour morphs that are completely different to those found outside the bay.

When scientists analysed the movements of landmasses in the area, they found that over the past 14 million years large island fragments have almost completely blocked the mouth of the bay.  These created a large lake out of the bay and effectively isolated its inhabitants from the outside world.  The different environmental conditions the creatures experienced acted as drivers of change and eventually moulded them into new species.  In isolation, much like the tortoises and finches of the Galapagos Islands, the ancestors of Cenderawasih’s endemic fishes eventually became those we see today.  The fishes with unusual colour morphs in the bay are actually populations on their way to becoming new species.  In fact, some of these may yet be described as distinct, pending results of on-going DNA analyses.

Another peculiarity of Cenderawasih Bay is the relatively shallow occurrence of several species such as the Ornate Angelfish (Genicanthus bellus), Randall’s Anthias (Pseudanthias randalli) and Burgess Butterflyfish (Chaetodon burgessi).  These fish are generally found below 50 metres throughout the rest of their range, but can frequently be seen between 20-30 m in Cenderawasih.  The theory behind this phenomenon is that during periods of lowered sea level in the bay (which has been 120 m lower than today’s levels on two occasions during the past 150,000 years) the availability of shallow reef-flat habitat was very limited, and the species that usually inhabit it went locally extinct.  When sea levels rose again, the deep water species exploited the vacant niches and have kept a foothold to this day.

Before seeing these deeper water fishes, I thought it so unreasonable for them to be living beyond our usual diving depths.  However, the more diving I did in their comfort zone, it really started to hit home that we are only just scratching the surface of the ocean when we dive.  Obviously, the deeper you go the more different colours in the spectrum are attenuated, but it is great to look at photos taken at depth.  The strobes really make the colours pop from the relatively drab colours you see with the reduced ambient light.  We saw many of these deep water species on the trip, especially around the Numamoron Strait and Roon Island area.

Whilst diving around Roon Island, in the vicinity of Yende village, we took the opportunity to visit the village and have a look around.  It is a very tidy and nicely kept place, with two large churches and a school that gladly received the supplies many guests had brought with them.  We saw the women of the village preparing Sago palm in the traditional way, by firstly whittling the pulp from the trunk and then removing the edible sediment from the fibre.  The village has received government subsidies and each house has a solar panel to provide a little electricity. The paths are all well paved and street lamps are also solar powered  with most houses built on stilts over the water.  The villagers were very amenable to our requests of diving their reefs and we were pleased to see healthy coral reefs, with endemics galore as well as sharks and turtles.

After Roon we finally managed a trip out to the Lincovin Patches, which are patch reefs located in the open ocean of the bay.  We had tried a couple of times to get out there, but some pesky swells had always thwarted us.  Finally, we were blessed with some calm weather and we took the opportunity to visit the reefs.  It was well worth the effort: the visibility was great and we saw many larger creatures such as whitetip, blacktip and grey reef sharks plus many turtles.  It was clear that these reefs aren’t fished, as commercially valuable species such as grouper and large parrotfishes were abundant too.  The shallow hard corals were in good condition, but sadly like much of Cenderawasih, we saw evidence of Crown of Thorns activity.  These huge sea stars are voracious corallivores that leave circular patches of white coral over the reef as their calling card.  Hopefully the reefs will be able to recover quickly from this onslaught, as they are otherwise unexploited and healthy.

After visiting the patch reefs we headed south to visit the whale sharks of Kwatisore.  There is always a slight feeling of nervousness when planning a wild animal encounter; you can’t just assume they’ll be there!  I certainly felt it when we returned to the bagans of Kwatisore hoping to see the whale sharks.  The process of arranging a swim with the whale sharks starts very early in the morning with the dive guides taking the tender boat out to see which bagans actually have sharks present.  Once they found one, they then negotiated buying some of the small fish that the fishermen caught overnight.  In the morning these were fed to the sharks in order to keep them around for our viewing pleasure.  This all goes on behind the scenes, as by the time the rest of us get up Yann, Andre, Risko and Ben had already organised a bagan for us to visit.

The number of sharks constantly fluctuated during our time in the water, as new animals arrived and others left.  At their most abundant, we were surrounded by five of these giants!  I think it’s very important to take a moment and really soak in the feeling of swimming with the world’s biggest fish.  Sometimes taking photos can become all encompassing and the true value of the moment missed.  Luckily, we had literally hours in the water with them and plenty of truly amazing moments.  I will never forget the moment one of the whale sharks came to the surface inches from my face to have a closer look at me.  I wasn’t feeding it, but it obviously just decided I wasn’t a threat and was worth investigating further.  Many times they came so close I had to avoid them crashing into me, but I found that by remaining calm and floating as still as possible they would always sense where I was and avoid touching me.  Having seen whale sharks fleetingly in the Galapagos Islands, Maldives and for more extended viewing in the Philippines, I would definitely say this is the best encounter that I have had with whale sharks.

During the trip we weren’t only served a generous helping of whale sharks, but we also saw some whales too.  On the crossing between Cenderawasih and Raja Ampat we saw a large Sperm whale hanging out at the surface.  Sperm whales make exceedingly deep dives to feed on squid, which indicates that the waters must drop off drastically from the northern Bird’s Head.  Then, on the first of our four days in Raja Ampat, around the Kri area, we had a couple of encounters with Minke whales.  Both of these whales have a huge geographic distribution, and whilst it’s rare, it’s not unknown to find them in the tropics.

Exploring Cenderawasih Bay has been a fantastic experience and I was thrilled to see so many of the endemic fishes of the area.  As a result of our encounters, I have developed quite a soft spot for dottybacks and fairy wrasses.  Biologically this is a fascinating place, but it must be said that the reefs don’t compare to those of Raja Ampat.  The diversity is discernibly lower, with the reefs being dominated by relatively few species compared to the vast array found in Raja Ampat.  The reefs were also much less busy, with fewer big schools of fish.  Having said that, there are very few reefs in the world that would stand up against those of Raja Ampat.  Plus, Cenderawasih remains one of the best places in the world to have in water experiences with whale sharks.

The past two months as naturalist on Dewi Nusantara have been amazing.  I have seen many creatures for the first time, especially thanks to all the unique fishes of Cenderawasih.  Our whale shark encounters were truly once in a lifetime and as always the reefs of Raja Ampat were mesmerising.  I’m not yet sure when I will be back in this part of the world again, but I hope it won’t be too long.  I will miss the fantastic staff and crew of Dewi, and especially the sound of the crew’s constant laughter.  I want to especially thank Guido, Wendy, Yann, Andre and Risko but the rest of the crew too, although there are sadly too many to name!!

My next dive trip isn’t until October, when I will be heading to Fiji’s Matava Resort leading a marine life course in conjunction with Deep Blue Adventures.  I will be carrying out daily lectures on coral reef biology and all that Fiji has to offer beneath the waves.  If you are interested in joining me feel free to read further details by following this link or drop me a line.

Pictures from Cenderawasih Bay can be seen by following this link.

To read the report from our first Cenderawasih Bay trip please follow this link.