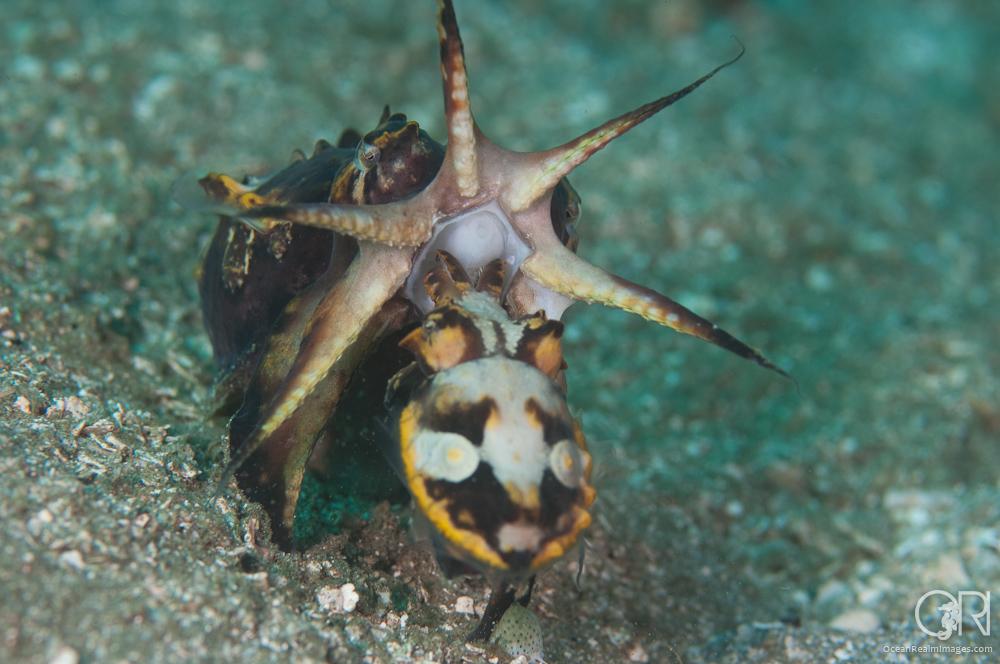 Continuing my Reef Creature Behaviour series, which started with ‘Something got your Tongue?‘, this week I will be answering the question: how do flamboyant cuttlefish (Metasepia pfefferi) mate.  I was lucky enough to observe this two years ago at Maluku Divers in Ambon, Indonesia.

I had just descended to about 10 metres on a late afternoon dive off the island of Ambon in Indonesia when suddenly the bright colouration of a large flamboyant cuttlefish caught my eye. These aren’t rare in Ambon, although they are elsewhere, but it is unusual for a flambo to show off its bright colours without first feeling
threatened.

Unfortunately, when people find a flamboyant cuttlefish they often attempt to encourage the animal to flash its defensive colouration.  The ordinarily brown animal suddenly flashes bright colours to advertise its poisonous flesh.  Sadly, this greatly disturbs the animal and the likelihood of subsequently seeing natural behaviours is greatly diminished.  I am a great believer in leaving animals undisturbed and waiting until they are comfortable enough to continue as if I weren’t there.  This will be a continuing theme throughout this reef Creature Behaviour series: to see natural behaviours the animal must not feel threatened.

I was intrigued to see what had caused the large flambo to flash its colours so I hovered several metres away and waited.  After only a few seconds I noticed that there was a second, much smaller, individual next to the larger one.  It too was flashing its bright colours and appeared to be stalking the larger one. After about five minutes the smaller animal moved slowly in front of the larger one and the bigger animal opened its tentacles wide.  The smaller animal swam quickly forward and deposited a sperm packet in the buccal cavity before retreating again.  This behaviour was repeated several times before the smaller male swam away.

After the male had departed I decided to wait and watch the
female a while.  She moved towards a boulder about the size of a melon and began excavating a hole beneath it.  The excavation was fairly rudimentary and after only a minute of so she paused motionless outside the opening she had created.  The female shuddered and a spherical shape formed in the middle of her tentacles.  She the disappeared into the hole to deposit her egg.  This deposition of the egg, followed by several minutes spent motionless outside the entrance of the hole continued until my hour was up and it was time to surface.

On a subsequent dive our guide showed us a tiny juvenile flamboyant cuttlefish, about the size of a bumblebee, which must have just hatched.  I’m sure it wasn’t from the clutch we saw being laid, but it is evidence that this species is successfully breeding in the area.

• The flamboyant cuttlefish, Metasepia pfefferi, is a cephalopod found throughout tropical southeast Asia.

• In addition, the paintpot cuttlefish Metasepia tullbergi, a sibling species to the flamboyant, is found in the waters between Japan and Hong Kong.

• Ordinarily, the colouration of the flamboyant is a rather drab brown, but when startled or threatened the cuttlefish flashes bright yellows, pinks and contrasting white and dark patches on the dorsal surface.

• It was recently discovered to have poisonous flesh, which is believed to be as lethal as the venom of the blue-ringed octopus.

• The flamboyant cuttlefish tends to walk along the bottom, in its preferred sheltered habitats, using its tentacles and modified flaps on the mantle under the body.