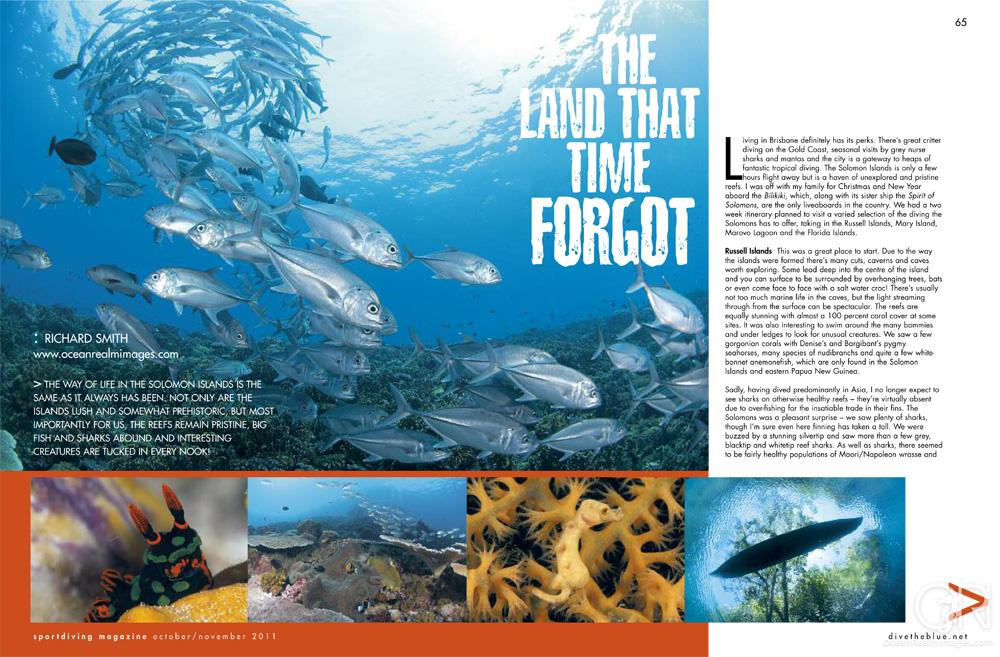 The new issue of Sport Diving magazine (Issue 148: October/November 2011) is now available throughout Australasia!  I am really pleased to have my third cover shot with the publication and an article about diving in the Solomon Islands entitled ‘The Land that Time Forgot’.

The cover shot is one of my favourite creatures: the Wunderpus octopus (Wunderpus photogenicus).  The brilliantly named cephalopod is a close relative of the mimic octopus but more colourful and interesting in my opinion.  I took the image in Komodo, Indonesia a couple of years ago when I was there with Graham Abbott, from Diving4Images, and Yann Alfian.  I spent quite a while watching this particular animal as it foraged for food by netting over small rocks and probing the crevices to scare out unsuspecting shrimps and fish as snacks.

My article ‘The Land that Time Forgot’ is about diving in the Solomon Islands aboard the Bilikiki Livaboard.  This really is one of the most diverse and fascinating spots to dive.  It is located close enough to the mega-diverse Coral Triangle of Indonesia, Philippines, Malaysia and PNG to have a really high biodiversity and is also just far enough away that the expanding human populations and development in these areas haven’t wrecked its reefs.  Highlights, diving wise, were Mary Island, which can only be reached by liveaboard boat, and has vibrant hard coral reefs and abundant pelagics and some of the dives in caves and near mangroves where saltwater crocodiles lurk!  Solomons really is a great dive location and worth checking out!