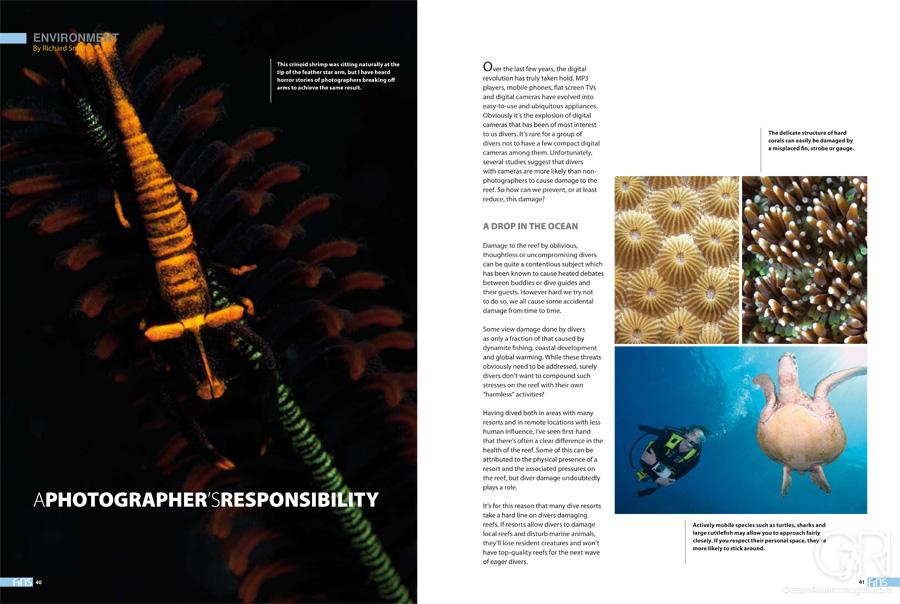 My new article ‘A Photographer’s Responsibility’ is published in the new issue of FiNS.  This is quite a controversial subject but, I think, very important.  Often photographers have a very bad reputation for damaging the reef and traumatising its inhabitants.  I find these habits quite distressing and completely unnecessary so was compelled to write this article.  I hope you enjoy it and it gives you something to think about.

Due to the success of this article and the ‘Dos and Don’ts’ section I created a downloadable pdf entitled ‘Underwater Photography Tips’.  Please feel free to print them out and take them on your next dive holiday!

Over the last few years the digital revolution has truly taken hold.  MP3 players, mobile phones, flat screen TVs and digital cameras have evolved into compact, easy to use and ubiquitous appliances.  Obviously it is the explosion of digital cameras that has been of most interest to us divers to such an extent that it is rare to get a group of divers that don’t have a few compact digital cameras between them.  Unfortunately several studies have found that divers with cameras are more likely to cause damage to the reef.  So how can we try to prevent, or at least reduce, this damage?

But a Drop in the Ocean

Damage to the reef by oblivious, thoughtless or uncompromising divers can be quite a contentious subject which has been known to cause heated debates between buddies or dive guides and their guests.  However hard we try not to do so, we all cause some accidental damage from time to time.

Some view the damage done by divers as only a fraction of that done by dynamite fishing, coastal development and global warming.  Whilse these threats obviously need to be addressed, surely divers don’t want to compound such  stresses on the reef with their own ‘harmless’ activities?

Having dived both in areas with many resorts and in remote locations with less human influence, I’ve seen first hand that there’s often a clear difference in the health of the reef.  Some of this can be attributed to the physical presence of a resort, and associated pressures on the reef, but diver damage undoubtedly plays a role.

It is for this reason that many dive resorts take a hard line on divers damaging reefs.  If they allow divers to damage local reefs and  disturb marine animals, they’ll lose resident creatures and will not have top quality reefs to show to the next wave of eager divers.

Harassment or a Helping Hand?

Moving or manoeuvring an animal to get a better shot is yet another issue that divides people.  Some believe there’s no harm in repositioning critters, while others hold firm that it shouldn’t be done under any circumtances.

Perhaps a good way to think of this issue is to consider how you would feel if a massive creature happened along  and manoeuvred you involuntarily for an obscure ritual you didn’t understand.  It’d be pretty terrifying wouldn’t it?

In my opinion activities that seriously stress an animal (such as inflating a pufferfish) should be avoided.  The ethics of moving organisms such as nudibranchs to a ‘better’ background is more open for debate, but I believe doing so detracts from a photo and is usually fairly recognisable.  Although at the end of the day moving a sea cucumber is vastly different from moving a pygmy seahorse.

Firing strobes repeatedly can also stress reef residents.  It’s difficult to recommend the exact number of shots or proximity each animal can tolerate, since some creatures are more sensitive than others, but as you spend time observing an animal, you should develop a sense of when to back off.

Remember – stressing animals makes them more susceptible to predators and disease, plus they are more likely to move and be around for the next group of divers to see.  The key is to finding a balance between getting a nice photo and respecting an animal’s space.

Role of Instructors and Guides

Buoyancy control is one of the most vital attributes of a good underwater photographer. Alas, this fundamental skill is only taught  at the novice  stage of learning and often never again.  It’s therefore vital for instructors to ensure that it is taught well, and to help divers re-learn this skill when the need arises.

Also, one study found that mentioning waht should and shouldn’t be done during the dive briefings has little impact on the amount of damage that divers subsequently cause.  The most effective way to remind divers of their personal role in reef damage is for guides to point out errant behaviour on-the-spot, as it happens.

No one is saying that divers are the sole cause of reef damage,  but since there are already so many stresses and pressures on coral reefs, surely we can all take a little extra care especially since there are literally millions of divers hitting the waters each year.

It’s a privilege for us to be able to dive and witness amazing habitats and species, and minimising our effect on the organisms we encounter will help maintain our ocean’s treasures for future generations.