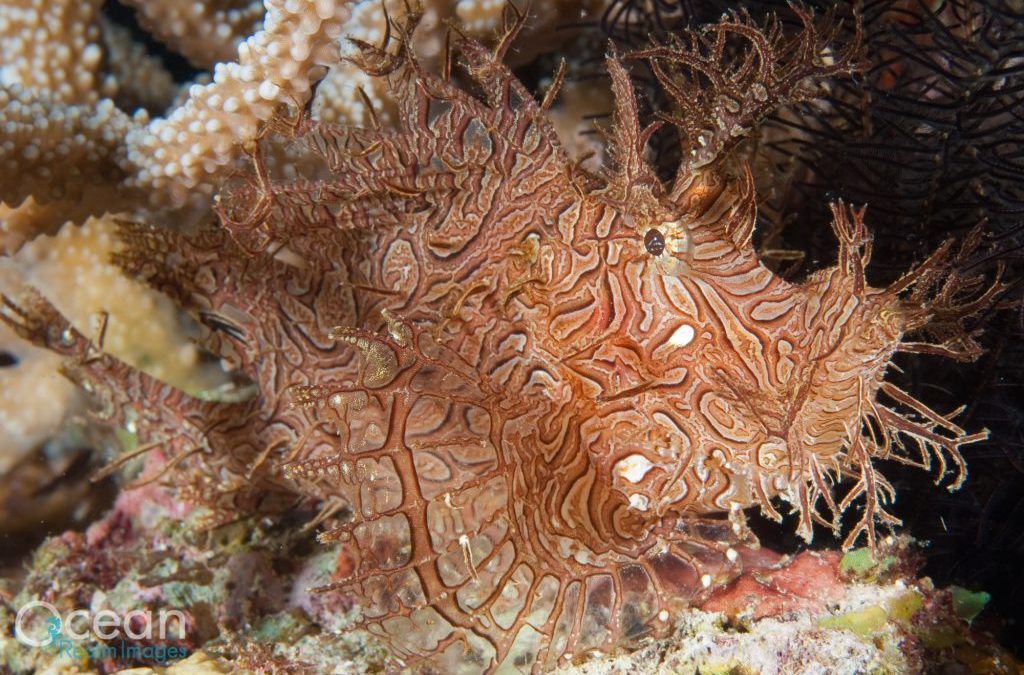 One of my pet peeves is the misidentification of members of the scoprionfish genus Rhinopias (family Scorpaenidae). There are 3 members of this genus that are commonly seen by divers in South East Asia – Rhinopias aphanes, Rhinopias eschmeyeri and Rhinopias frondosa. There are in fact a total of six species of Rhinopias but the other three are very restricted in range and found only in Japan (Rhinopias argoliba), Hawaii (Rhinopias xenops) and Easter Island also known as Rapa Nui (Rhinopias cea).  Actually geography plays a much greater part in the identification of Rhinopias than people realise.  I thought I would try and help people out with the identification of these interesting fish with some useful facts and information:

Lacy Scorpionfish / Rhinopias aphanes  – is endemic to the Coral Sea area of Papua New Guinea, Great Barrier Reef, Solomon Islands and New Caledonia. They differ in habitat preference from the other two species as a result of the predominant environmental conditions in the Coral Sea. They are found on rich coral bommies and walls sitting out in the open, mimicking crinoids. The patterning on the body is made up of a network of line rather than spots and colouration is quite variable as with the other species.

I saw this species at several sites in the Milne Bay area of southeast Papua New Guinea. 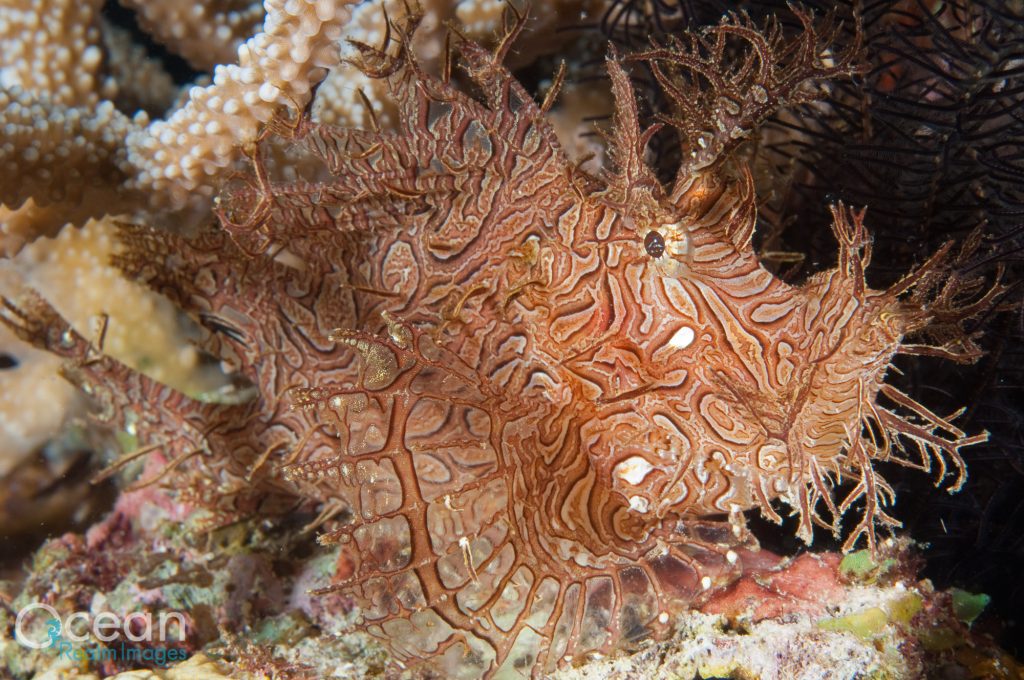 The stuuning Lacy scorpionfish, Rhinopias aphanes waits patiently on the reefs of Papua New Guinea and the Great Barrier Reef for a hapless fish to stray too close.

Paddle Flap Scorpionfish / Rhinopias eschmeyeri – This is the easiest species to identify. The body is generally only one colour with very few other markings. There are also hardly any filaments on the skin and the dorsal fins are completely lacking in skin filaments or indentations adjacent to the spines, hence the common name. I have seen red, pink and purple individuals. The range is throughout much of the tropical Indo West Pacific. It prefers ‘muck’ dive sites with black sand and algal beds.

I have seen this species several times at various spots in Indonesia and the Philippines. 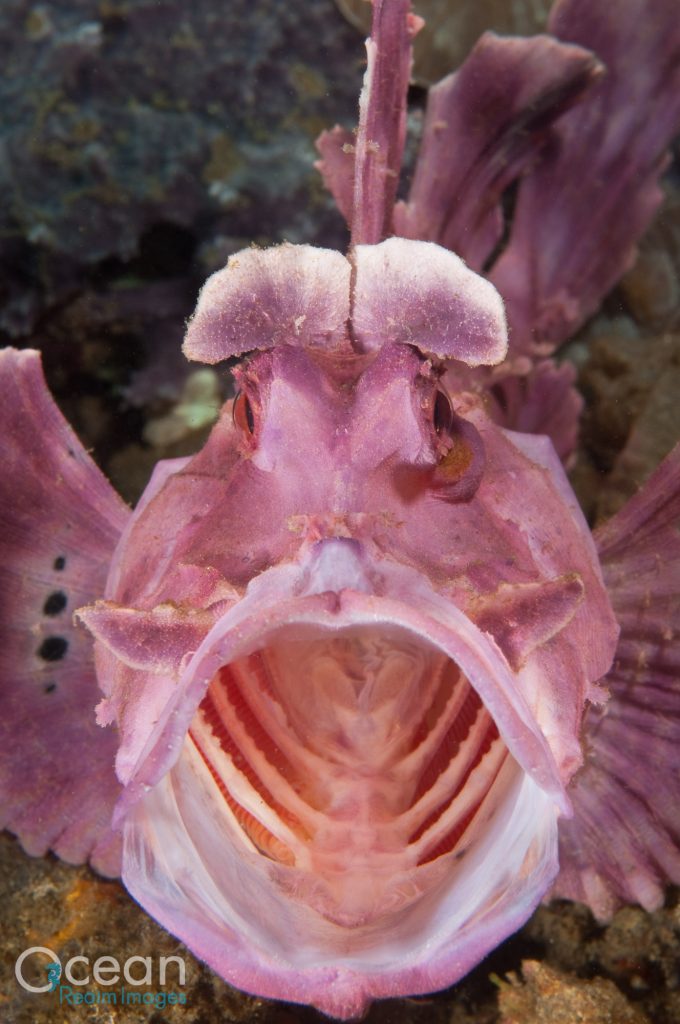 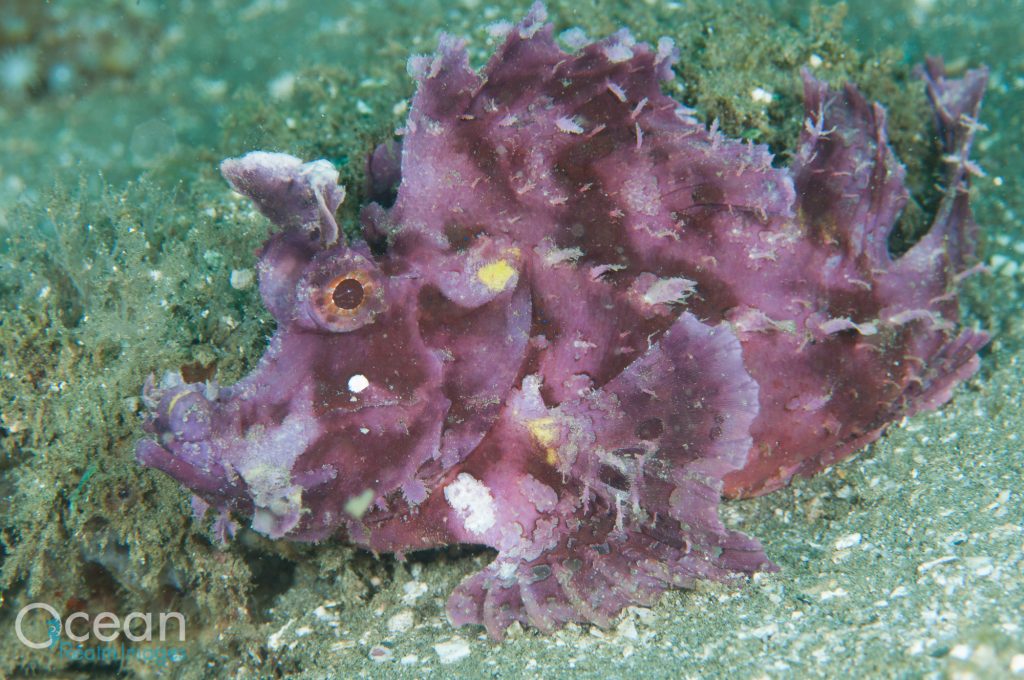 Weedy Scorpionfish / Rhinopias frondosa – This is the only species of filamented Rhinopias that is found in Indonesia and Philippines but is often incorrectly identified as the Lacy / R. aphanes species. It shares the same habitat as R. eschmeyeri and the two often co-occur. This species is found in white, yellow, purple, red and all manner of other colours. It has circles rather than lines covering the body. It is also found throughout the Indo West Pacific as far west as Mozambique. It can therefore occur in the Coral Sea but habitat type and body patterning easily distinguish it from R. aphanes. 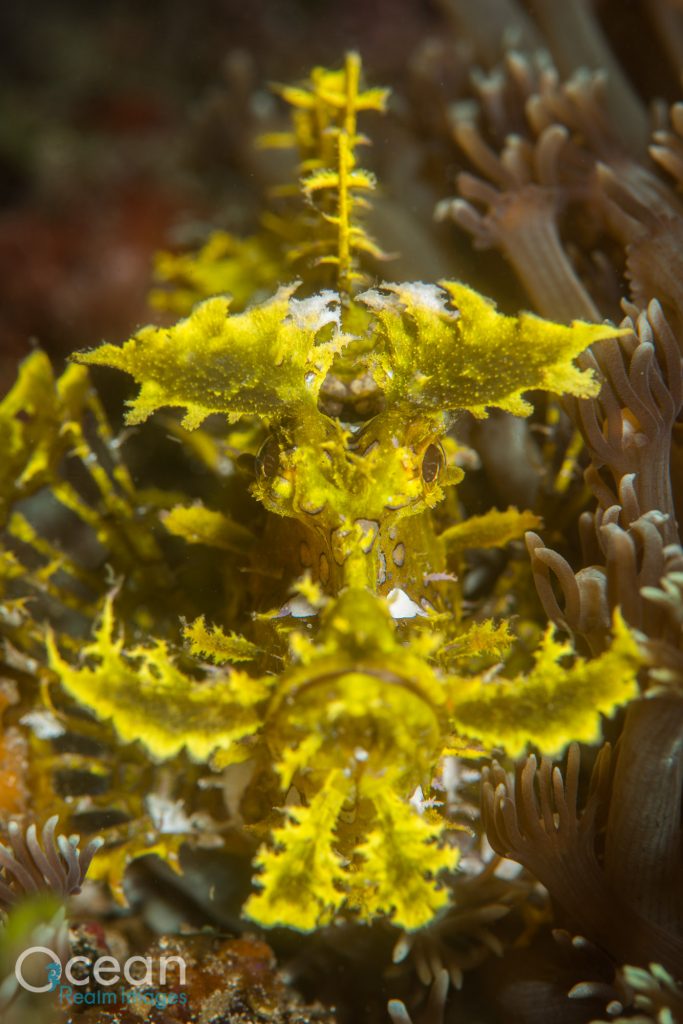 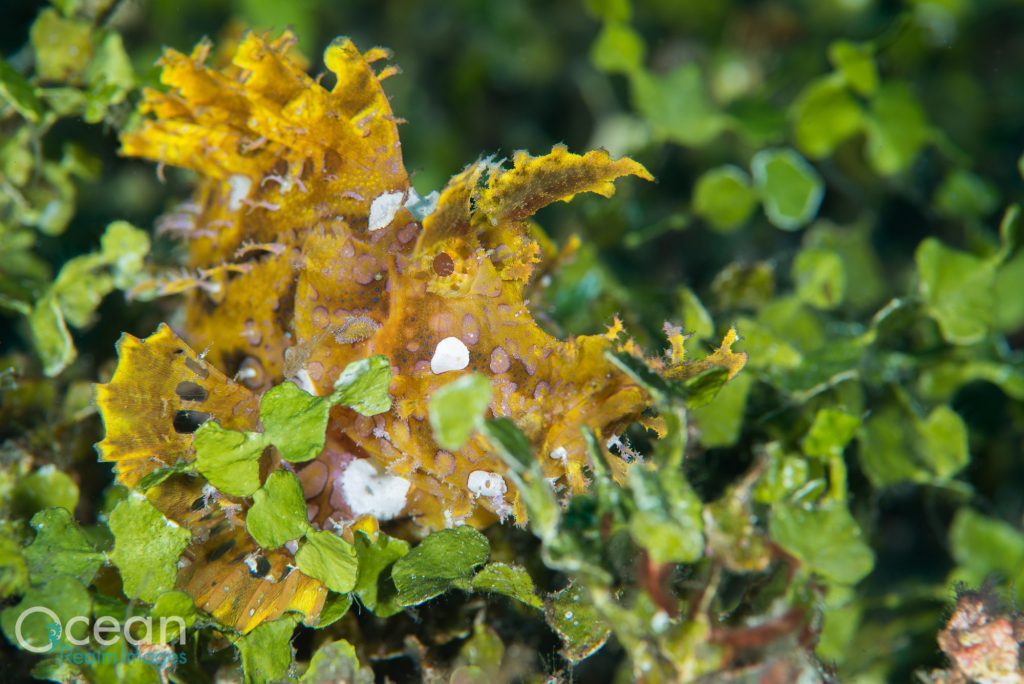 Filamentous Scorpionfish / Hipposcorpaena filamentosus – Another fish that could confuse this slightly is the quirky Filamented scorpionfish. It is only known from a few specimens across Philippines, Indonesia and Papua New Guinea. I saw it just once in Alor, Indonesia and for the longest time thought it was a juvenile Weedy scorpionfish. They are small fish, just a few inches long, that are found on muck dive sites. I have also heard of them being found occassionally in Bali. 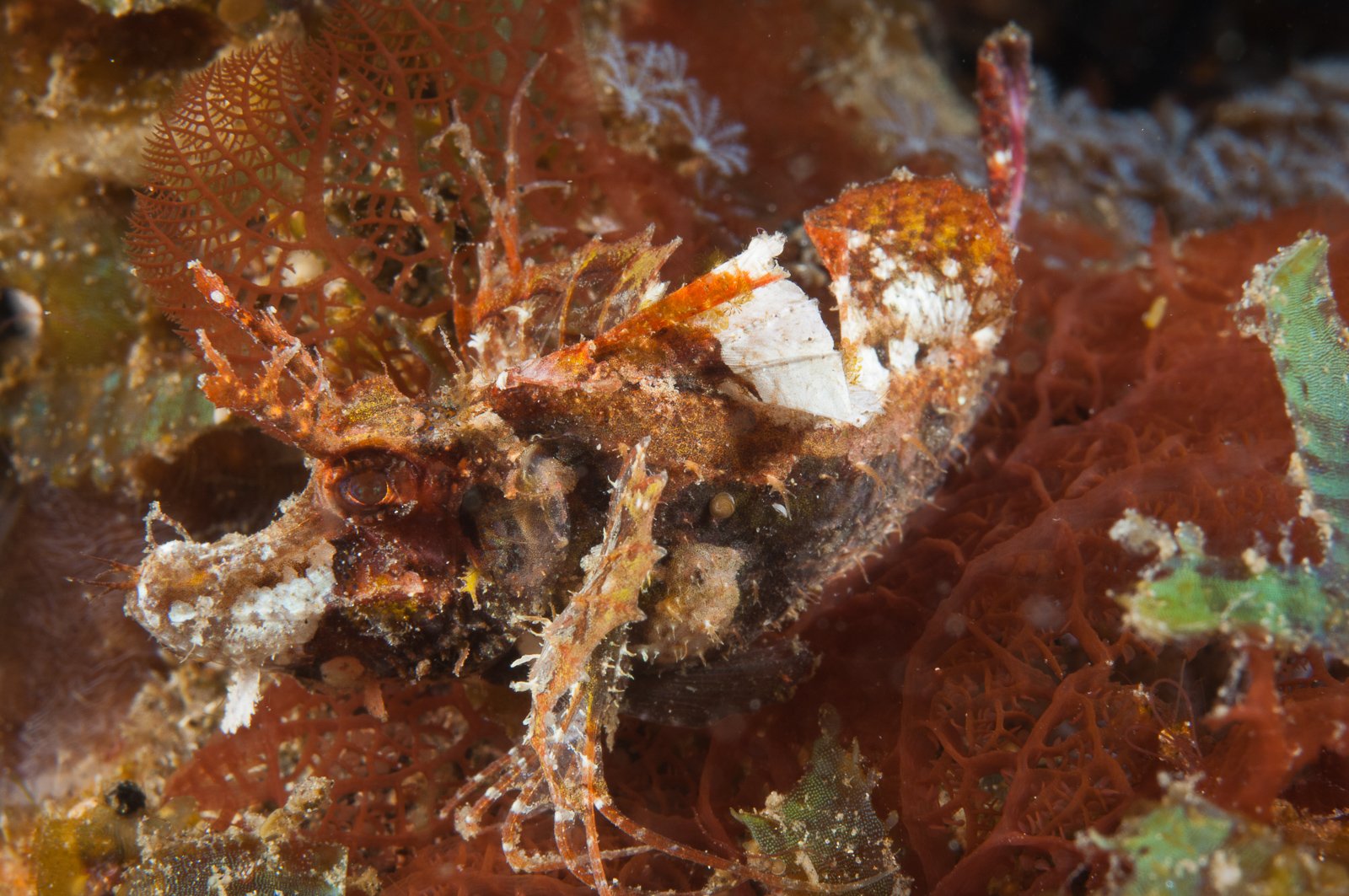 * If you reference this, or any other page on my website, please ensure to credit me!