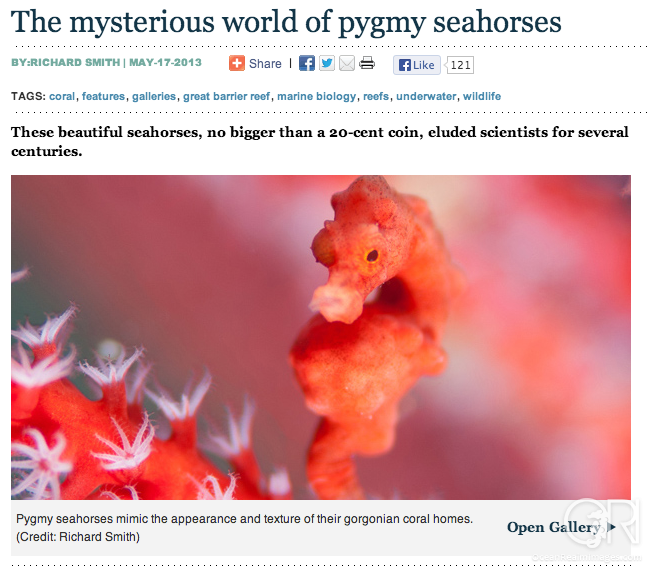 Recently, I was very pleased to have a feature gallery with Australian Geographic.

This iconic publication published a gallery of my images of pygmy seahorses, including mating, fighting and giving birth, along with an short article I wrote.

You can FOLLOW THIS LINK to the gallery or read the article below:

PYGMY SEAHORSES ARE AMONG the world’s smallest fishes. Around 2cm in length, these tiny animals are relatively new to science: six of the seven species were named in the last two decades.

Two species, Bargibant’s and Denise’s, are extreme habitat specialists. They live only on gorgonian coral – soft, bush-like colonies that thrive in tropical water temperatures – in parts of South East Asia, and less commonly the Great Barrier Reef in Australia.

Pygmy seahorses live in small groups. They enter the group as a juvenile, having spent a week or two floating around in the ocean after their birth. Over their first five days on the gorgonian, they change to perfectly match the colour and surface texture of their new home. They remain on this coral for the rest of their life, even in the absence of other seahorses.

Their camouflage is astounding, and goes a long way toward explaining their relatively recent discovery. As a result of this disguise, they have few natural predators.

Like other seahorses, pygmies have the reproductive quirk of male pregnancy. However, they differ from other seahorses in that the male broods the young in a pouch located within the body cavity, rather than on the tail.

Dr Richard Smith is a British marine biologist and photojournalist. He conducted his PhD on the biology and conservation of pygmy seahorses.