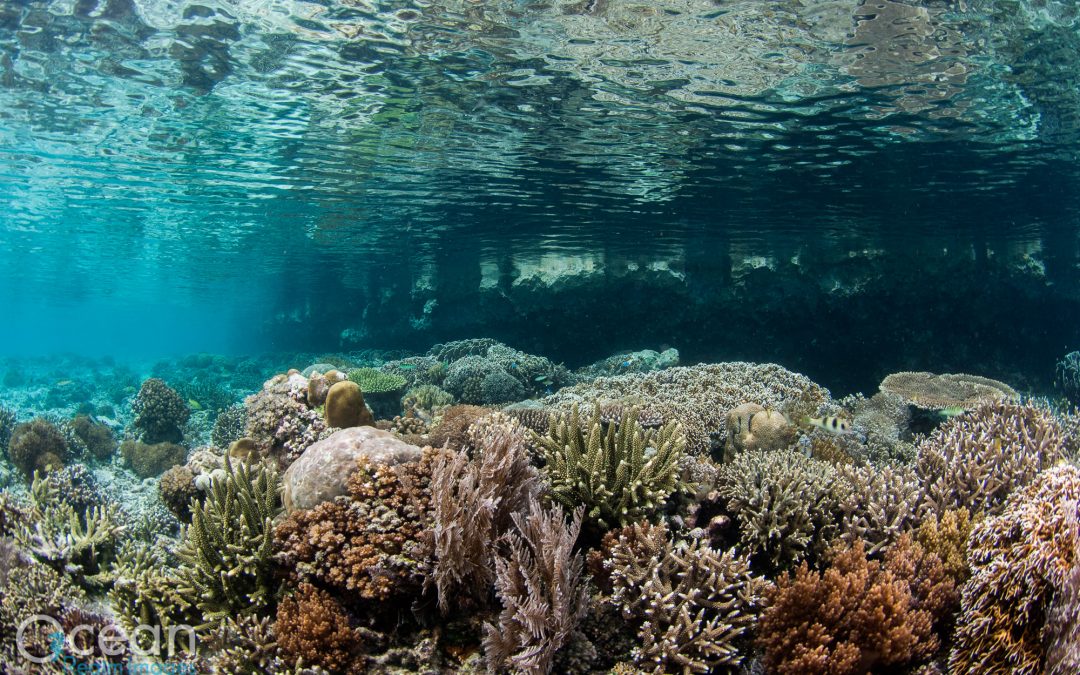 The past eleven days have been spent on a very special trip aboard Dewi Nusantara surveying and exploring a couple of areas in central Raja Ampat, in conjunction with the Sea Sanctuaries Trust.  The trust works with local communities to conserve large tracts of reef from overexploitation and destructive fishing.  For the trip, we had the honour of being joined by the eminent Doctors Gerry Allen and Mark Erdmann from Conservation International, who were surveying the reefs and searching for new and unusual species. We were also joined by various donors involved in conservation funding; from the man after which the Triton Bay walking shark, Hemiscyllium henryi, is named to a family that have worked hard to protect jaguars and hyacinth macaws in the Brazilian Pantanal.

Gerry and Mark were initially held up for 36 hours in the Aru Islands due to bad weather.  Apparently it had been an ambition of Gerry’s to visit these islands, where they were searching for freshwater fishes.  They finally joined us off the island of Kri and quickly began unpacking various rainbow fishes and even a freshwater pipefish from the pickling jars.  After less than an hour on board they were already off exploring Blue Magic for a massive whiptail ray that Mark had recently come across.  With a 3.5 m wingspan, it appears to be a new species but they came back empty handed on this occasion.

After a couple of days around Kri, we headed north to Aljui Bay.  Given that this is one of my favourite spots on the usual itinerary I was very happy to spend the day here.  Whilst on the night dive at Cendana Dock I remembered that Wendy, the cruise director of Dewi, had been telling me about a discovery made by Anna and Ned DeLoach whilst they had been on the boat last time.  She told me of a new species of hermit crab crab (a crab that lives on a hermit crab), which they had found at Aljui.  So, when I happened across a hermit crab, I had a closer looks and sure enough I found a relatively large porcelain-like crab clinging to hermit crab’s shell.

The morning after Aljui we went off in search of arguably New Guinea’s most iconic species, the Bird of Paradise.  A large fig tree just in shore is a lekking site (a lek is a patch of ground or area used by a group of birds or mammals used for communal display) for male Red Birds of Paradise to display and woo the females.  Personally I didn’t see the birds, but I did see several large flocks of Palm cockatoos flying overhead.  There were also several pairs of Blyth’s hornbills and high up in a tree, a spotted couscous slowly ambled between bows. 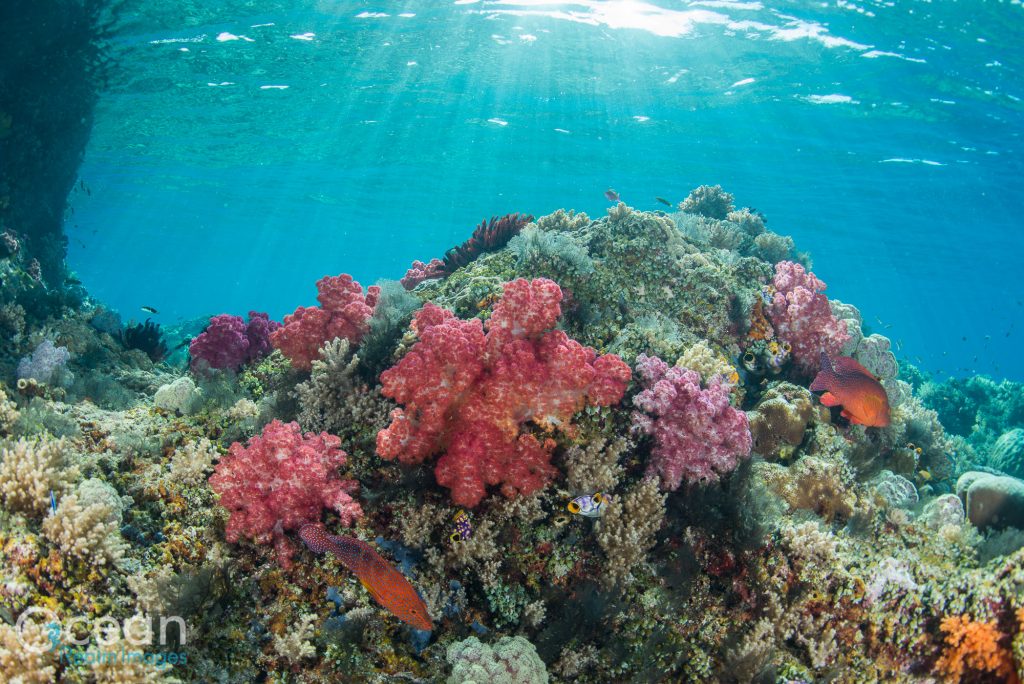 After birding on Waigeo, we headed into the heart of the Sea Sanctuaries no-take zone in Penemu.  In fact, Sea Sanctuaries have set up two large no-take zones (NTZ) with many ties and links to the local communities.  They have made a long term, 25 year, commitment to the villages in the Fam area with an agreement for 70,000 hectares to be protected.  The delineation of the NTZs is legally binding and there are even community sanctions for breaking the rules of the zone, such as cleaning the local toilet.  The two NTZs are centred around the uninhabited island of Penemu and the remote Bambu atoll, which are 5,610 ha and 64,218 ha in size respectively.

During the cruise, Gerry and Mark conducted underwater visual censuses of the species found in both of Sea Sanctuaries’ no-take zones.  For the 11 sites surveyed, they recorded a total of 707 species and their data indicates that there are many more species to discover here: an estimated 854 on Penemu’s reefs.  The average diversity they found on any one site was extremely high throughout, but at Batu Rufas they recorded a staggering 357 species.  This is actually the second highest number of species they have ever found on one site. Given that Raja Ampat has the most diverse marine ecosystems globally: at Batu Rufas we actually experienced the world’s second most species rich dive! 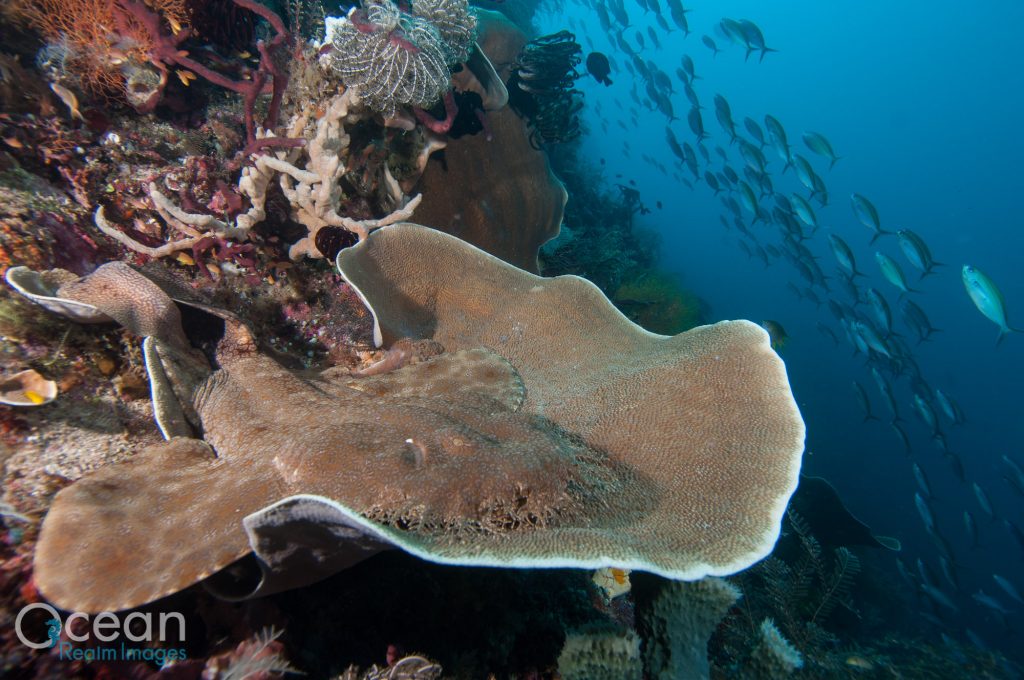 As well as high fish counts, Mark and Gerry also documented 18 species whichhadn’t previously been recorded in Raja Ampat, including Satomi’s pygmy seahorse (Hippocampus satomiae) and the leather coral pipefish (Siokunichthys breviceps) that I was able to add to their list.  This helped to push the total number of species found so far in Raja Ampat to 1502 and 1697 for the entire Bird’s Head Seascape, for which they added ten new species this trip.  Very excitingly, they also found two or three fishes that may well be new to science, including a whiptail (Pentapodus sp.), dottyback (Pseudochromis sp.) and a dwarf goby (Trimma sp.).  This just goes to show how important it is to conserve these reefs and the ideal location of Sea Sanctuaries’ Penemu no-take zone.

We spent several days diving the Penemu NTZ, which in my opinion boasts some of the best diving in all of Raja Ampat.  We did a couple of dives at both Melissa’s Garden and the ridges of Batu Rufas, which thankfully are both under the protective umbrella of Sea Sanctuaries.  Melissa’s has absolutely stunning hard coral gardens from which clouds of hungry damselfish create a wall of mouths for passing plankton.  For the two dives at Melissa’s I didn’t go deeper than 10 metres, spending a couple of hours mesmerised by the swarms of fishes.  At Batu Rufas, here too huge schools occupied the shallows, but descending along a couple of the ridges, soft corals, gorgonians and different fish species proliferated.  This diversity of habitats partly explains why Batu Rufas has so many species. 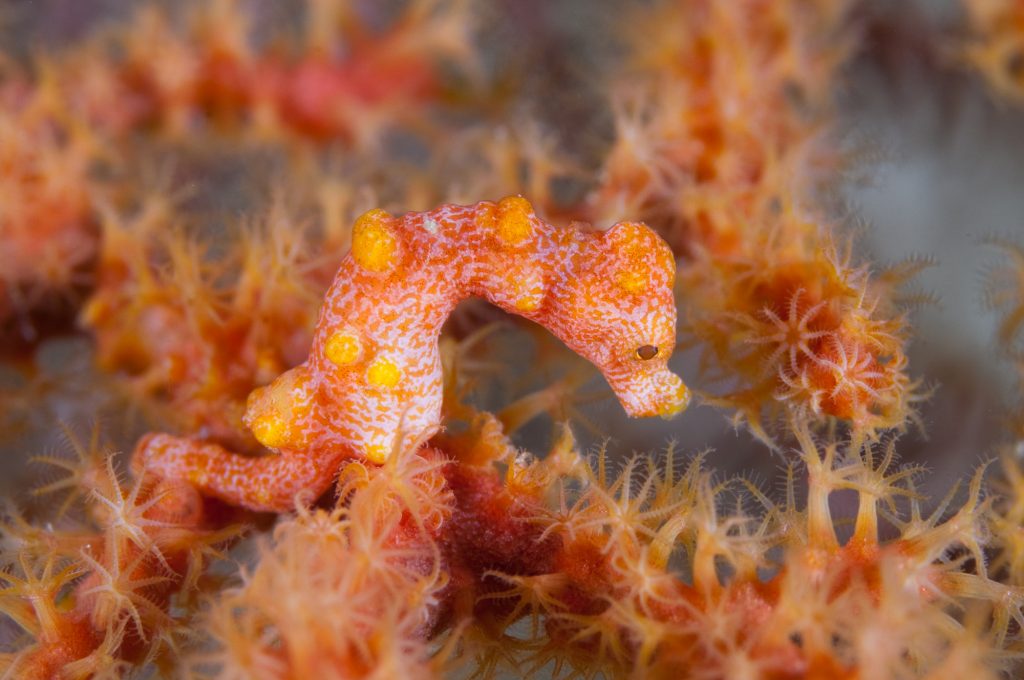 We also explored the remote Bambu region, which, so far as we know, has never been dived before. Bambu island is the second no-take zone created by Sea Sanctuaries.  Given that this was virgin territory we split into sub groups to survey the widest area possible and different depths.  The first dive of the day at the centre of the atoll was very promising and I saw five black-tip reef sharks, large groupers and mantas at the surface.  Sadly the following two dives next to the deep drop off were badly damaged by dynamite fishers.  It seems that without any villages to keep an eye on their valuable resource it had been looted by others less willing to take care of it.  Despite this, Mark and Gerry still found relatively high species diversity and hopefully now that this area falls within the no-take zone some recovery can begin to take place.

This was an extremely rewarding trip and it was an honour to share a boat with such amazing biologists and conservationists as Mark and Gerry for ten days.  I will look forward to hearing how the descriptions of the new species progress and most importantly how Sea Sanctuaries works to protect them and their homes.

After just over 24 hours in Sorong we will be heading off again, this time to Cenderawasih Bay on the north coast of Papua.  Mark very helpfully gave us many great sites to check out so I will be reporting on that when we next have reception in two weeks.  In the mean time I have posted the images from this trip, which can be found by following this link.