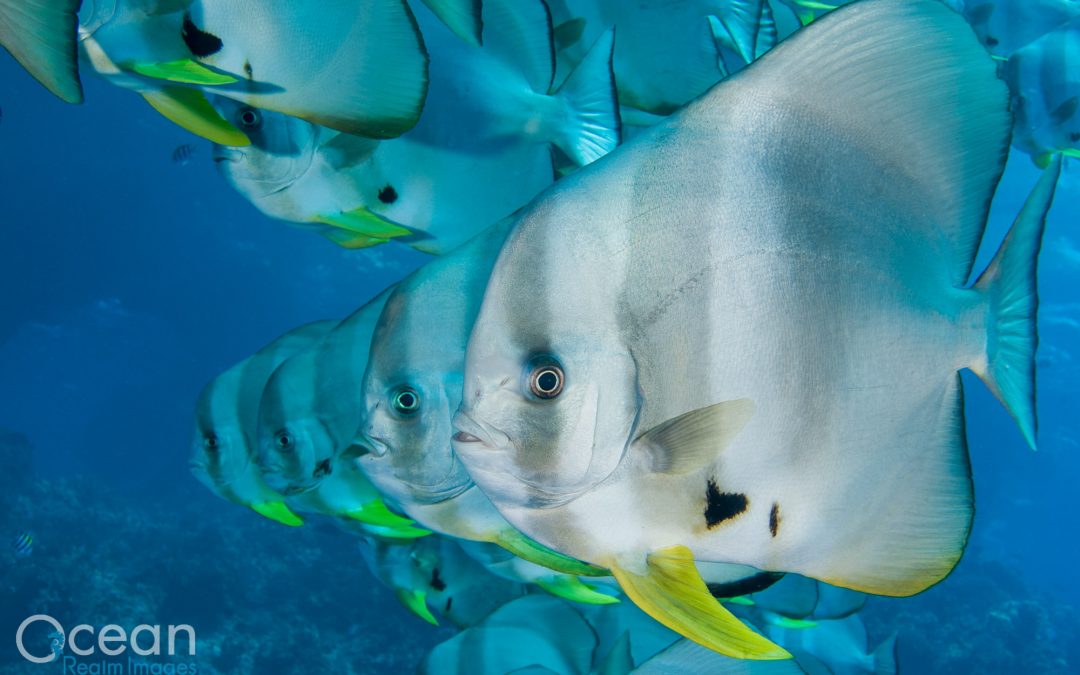 I was ever so excited to welcome the guests for my second trip around the Raja Ampat region of Papua, Indonesia aboard the beautiful Dewi Nusantara as it meant we’d be back in the water very soon!  The first day of diving is such a solid start to the itinerary and really sets the scene for what’s to come that even veteran divers are astounded by the riches of the area.

We began by spending a day in the vicinity of Kri and Sorido Bay Resorts where the first dive offered up three Pontoh’s and two Severn’s pygmy seahorses.  It was exciting to see these usually extremely hard to find fish in such abundances so I spent much of the diving observing them whilst others saw bigger creatures such as tasselled wobbegong sharks and schooling snappers.

The second dive thrust bigger fish into my focus as a couple of grey reef sharks hunted a school of scad near me and we spent the second half of the dive entertained by four giant mantas (Manta birostris).  Giant mantas are distinguished by bold black and white colouration on their back surface and a knuckle shaped lump just behind the small dorsal fin.  It was great to see that one of these four females was quite heavily pregnant.  They were happy to make extremely close passes of us, even too close for my wide angle lens on several occasions, whilst they were getting cleaned!

As the new cohort of guests settled onto the boat I was reminded (as if I needed a reminder!) what a special and magnificent vessel she is.  Based on the design of an American schooner and with French interior design; her size and silhouette alone demand respect.  With three masts and at a length of 57 m the Dewi Nusantara, translated from Indonesian as Goddess of the Archipelago, is striking.  Attention to detail was paramount in her design, intricately carved symbols and carvings can be found all over her.  The rooms are equally impressive: a blend of artistic curves and naval craftsmanship.  Not to mention the famed ‘Master and Commander’ suite, which spans the width of Dewi and has a wall of windows across the stern, a Jacuzzi bath and lounging area.  Surely this suite alone is the envy of other luxury live-aboards worldwide.

After such an exciting first day it was the perfect time for my first talk, which is entitled ‘Why is Raja Ampat so Special?’.  It wasn’t a difficult talk to put together as the lush reefs, abundant fish life, unique and rare creatures all speak for themselves.  I have found that this talk really puts the rest of the itinerary into context from the animals we see to the types of reefs we encounter.

The next day we had planned to visit the manta cleaning station at Arborek but it was a little choppy so we decided to defer that for our journey south and headed to Melissa’s Garden instead.  Much like the rest of Raja Ampat, Melissa’s really is pristine, frontier diving at its best.  The shallow reef top is covered in stunning hard corals that sprawl over an area at least the size of a football (soccer) pitch.  Last trip I spent the entirety of two dives just taking in these shallow areas but this time I decided to explore the reef crest and sloping walls.  I found several female gobies laying their eggs on whip corals whilst their partner fertilised them.  The eggs are transparent when laid but as they mature they turn dark as the fry develop inside.  There was also abundant fish life and we passed a large school of slender pinjalo and numerous barracuda schools.  Returning to the boat after one of our dives we came across a pod of spinner dolphins too.

After a couple of dives spent around the aptly named Eagle Rock, where a trio of enormous fish eagle soared above us, we sailed into Aljui Bay.  Pygmy seahorses abound here, as do many rare and unusual nudibranchs, cowries and flatworms.  We dived the Cendana dock on consecutive nights and encountered a smorgasbord of amazing animals.  A stargazer, pair of rough snout ghost pipefish, spot-tail frogfish, flamboyant cuttlefish, coconut octopus, bottletail squid, velvetfish, 6 Raja Ampat walking sharks and a harlequin shrimp were just a few of the more celebrated inhabitants of the dock!

On our voyage south from Aljui we stopped at Arborek to dive ‘Manta Sandy’, which we had missed on the second day.  I took the controversial decision to put on my macro lens and photograph the small critters of the sand/rubble area near the manta cleaning station.  Of course this was always going to mean that hundreds of mantas would show up to entertain the other guests, and sure enough they did.  At least half a dozen reef mantas (Manta alfredi) came in to be cleaned.  The saving grace for my macro lens was that Andre, one of the boat’s guides, found me a fantastic bright orange and beige velvetfish in the rubble.  Luckily, we returned for a second dive at the site, which meant I could swap to wide angle and even luckier, the manta action was better than the first dive.  Several mantas passed only inches above me and we had some brilliant encounters, which were some of the best I’ve had at the site.

Following a great day at Manta Sandy we headed to the south-eastern Misool area.  We were utterly blessed this trip with the most fantastic visibility I’ve ever seen in this region.  The water was impossibly blue and when set against the kaleidoscope of soft corals this was truly a sight be behold.  We also had epic schools of silversides on several sites.  One school was even using the three windows of ‘Boo Jendela’ as a highway to avoid a large school of ravenous trevally.  Watching them flow in a tide of bodies back and forth was heart wrenching knowing that some at least wouldn’t survive the predator’s onslaught.

Our night dives were also particularly memorable in this southern region.  Wendy, the fantastic cruise director, found two huge Spanish Dancer nudibranchs (Hexabranchus sanguineus), which were as long as from the tips of my fingers to my elbow!  One had a small pair of imperial shrimp living commensally on its surface.  At another site we saw a trio of rare crustaceans: tiger shrimp (Phyllognathia ceratophthalmus) cryptic sponge shrimp (Gelastocaris paronae) and a Xenia coral shrimp (Hippolyte sp).  There were also nine of the usually impossible to find and very well camouflaged nudibranchs Phyllodesmium jakobsenae!

After such a brilliant time in the south our bittersweet final day of diving was upon us.  It is bitter since it is our final day of diving for the trip and sweet as it’s muck diving!  If you have seen my image galleries and read some of my articles you’ll probably know that I LOVE muck diving!  Batanta certainly didn’t disappoint.  We saw a host of rare nudibranchs, a juvenile pinnate batfish and a feeding blue ringed octopus!

In a couple of days we’ll set sail for my final trip aboard Dewi.  I’ll be posting a blog after that trip but until then have a look at the images I just uploaded from this trip.  They can be found by following this link.